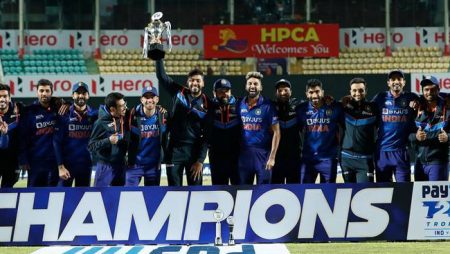 Team India easily chased down the visiting Sri Lankan team’s target of 147. Winning by six wickets in the final T20I at the Himachal Pradesh Cricket Association Stadium in Dharamsala on Sunday. The victory, which also gave India a series sweep. Helped the team equal the record for the most consecutive T20I victories without a defeat. India tied Afghanistan and Romania for the most wins in the format, with 12 victories from 12 games.

The toss was won by SL captain Dasun Shanaka, who chose to bat. IND annihilated the top order, leaving the visitors reeling at 34/4 in 9 overs.

lso Read: During the second T20I in Dharamsala, Mohammed Siraj and Kuldeep Yadav pull a hilarious prank on the umpire.

Shanaka, on the other hand, picked up where he left off in the second T20I and play mesmerizing shots to propel the team past the 140-run mark.

India trailed by 147 points after losing openers Rohit Sharma and Sanju Samson early in the game. Shreyas came in and took the mantle, rallying the team past the finish line with 19 balls remaining and six wickets in hand.

Shreyas won the player of the series award after batting brilliantly in both the first and second T20Is.

Captain Rohit, on the other hand, will need to consider areas where the team can improve, such as death bowling.

Although the home team was missing pace bowlers such as Jasprit Bumrah, Harshal Patel and Avesh Khan showed some promise despite leaking runs near the end of the innings.

Also Read: Rohit Sharma Says After India’s T20I Series Sweep Against Sri Lanka: “You Don’t Have To Worry About Your Positions.”

2 Replies to “With Sri Lanka’s clean sweep, India equaled the record for most consecutive T20I wins.”