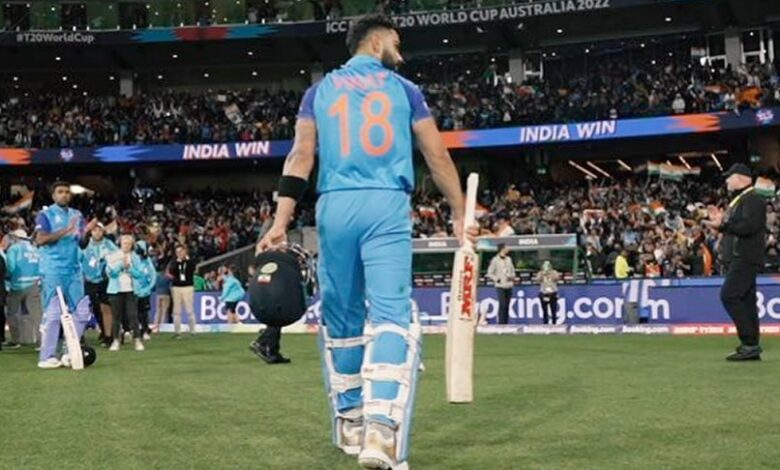 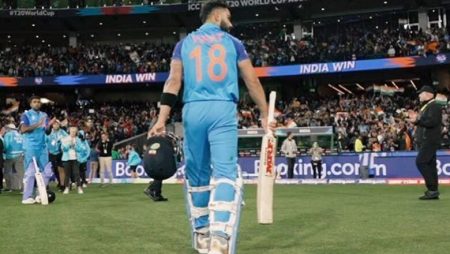 Virat Kohli Remembers Knock Against Pakistan In T20 World Cup. On Saturday, Kohli posted an Instagram photo from the match against Pakistan with the caption. ” October 23rd, 2022 will always have a special place in my heart. I’d never felt that much enthusiasm in a cricket game before.

Team India was project to win the T20 World Cup in 2022. However, the team was eliminate after losing to England in the semi-finals. England steamrolled India in a one-sided match, and the Jos Buttler-led side went on to win the championship for the second time. The tournament, though, will be remembered for Virat Kohli’s exploits and how the batsman was in great form. It’s difficult to forget the batter’s unbeaten 82-run knock against Pakistan. Which helped India win in the final over at the Melbourne Cricket Ground.

On Saturday, Kohli posted an Instagram photo from the match against Pakistan with the captio. ” October 23rd, 2022 will always have a special place in my heart. I’d never felt that much enthusiasm in a cricket game before. That was a very great evening.”

After being reduce to 31/4 in the seventh over while chasing 160. Team India was almost out of the game. But a solid partnership between Kohli and Hardik Pandya got them back on track.

In the last overs, Kohli dismissed Shaheen Shah Afridi, Haris Rauf, and Naseem Shah. Mohammad Nawaz delivered the game’s penultimate over. The spinner erred by bowling a no-ball and a wide, but Kohli ensured that India crossed the line.

Indian superstar Kohli bats at No.3. Having finished as the tournament’s best run-scorer with 296 runs at a staggering average of 98.66.

Kohli began his campaign with a crucial 82 not out against Pakistan. Anchoring his team to a heart-thumping final-ball four-wicket triumph.

Further blows of 64 not out against Bangladesh, 62 not out against the Netherlands. 50 against England in the semi-finals rounded off an individual tournament to remember for one of the contemporary era’s best white-ball batters.

Also Read: Pakistani squad gets praised by General Qamar Javed Bajwa – ‘Made the country proud by leaving the multi-billion dollar teams behind’