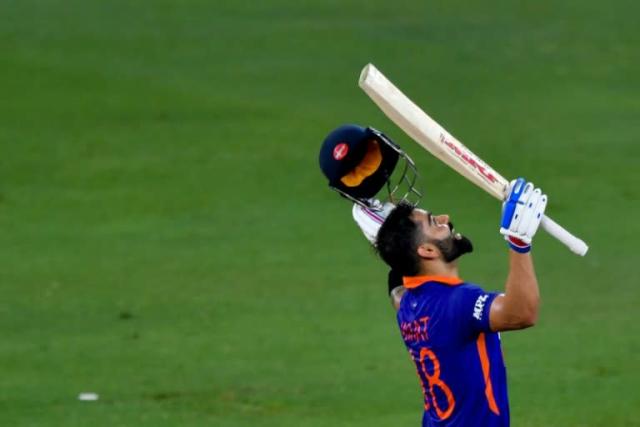 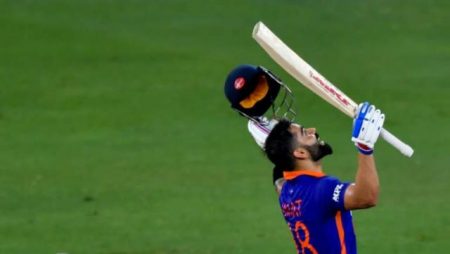 Virat Kohli Ends India’s Drought With His First T20 International Ton. Virat Kohli hit his first international century since November 2019 with a maiden T20 ton for India on Thursday. Leading the team to a 101-run win over Afghanistan in the Asia Cup.

Virat Kohli hit his first international century since November 2019 with a maiden T20 ton for India in the Asia Cup on Thursday, leading the team to a 101-run victory over Afghanistan. The star batsman batted unbeaten on 122 off 61 deliveries to lead India to 212-2 in Dubai. After being put in to bat first in their final Super Four match after being eliminated from the tournament. Bhuvneshwar Kumar returned his T20 best of five wickets for four runs to help Afghanistan to 111-8, with Ibrahim Zadran unbeaten on 64.

But it was Kohli’s day, as he hit a four and a six off. Pace bowler Fareed Ahmad to reach his first India ton in nearly three years, his last coming in a Test against Bangladesh.

“The last two and a half years have taught me a lot. I will be 34 in a month (less than two months – November 5),” Kohli said after his knock to Star Sports.

“So those angry celebrations are a thing of the past. Actually, I was shock. This is the last format I thought (of scoring a century). It was an accumulation of a lot of things,” he said.

Kohli recently discussed his mental struggles, as well as how he took a month off before the Asia Cup to regain his intensity, which he “faked” during the dry run of form.

“The team has been approachable and helpful. I know there was a lot going on outside “He stated.

“After six weeks off, I felt revitalized. I realize how exhausted I was. Competitiveness does not permit it, but this break allowed me to enjoy the game once more.”

As the Afghan bowlers struggled on their second consecutive day on the field after a heartbreaking loss to Pakistan on Wednesday, he put on an opening stand of 119 with KL Rahul, who made 62, to lay the foundations of the mammoth total.

Kohli scored his third 50-plus score in the event, which serves as a warm-up for the T20 World Cup in Australia in October-November.

The Indian openers began cautiously before Rahul and Kohli unleashed a barrage of boundaries in the first six overs.

Kohli survived Ibrahim’s dropped catch in the deep on 28 when the ball popped out of the fielder’s hands for a six, and the star batsman then reached his fifty in 32 balls.

Rahul reach his half-century with two straight boundaries off skipper Mohammad Nabi, but he was dismiss in the next over.

The rest of the innings belonged to Kohli, who hit the bowlers all over the place to overtake Pakistan’s Mohammad Rizwan as the tournament’s leading run-scorer with 276 in five games.

Kohli, 33, smashed 12 fours and six sixes in his dominant knock. He has 27 Test and 43 ODI centuries in his stellar career.

The Afghans appeared jaded after losing by one wicket to Pakistan and exiting the tournament.

They were dismiss for four wickets for nine runs in three overs. Kumar ripping through the opposition top order before Ibrahim carried his bat through and forced his team to bat for 20 overs.

Pakistan will play Sri Lanka on Friday in a practice match for the title match on Sunday.

Also Read: Here is the 2022 Asia Cup Points Table following the match between Afghanistan and Pakistan.