Here is the 2022 Asia Cup Points Table following the match between Afghanistan and Pakistan. 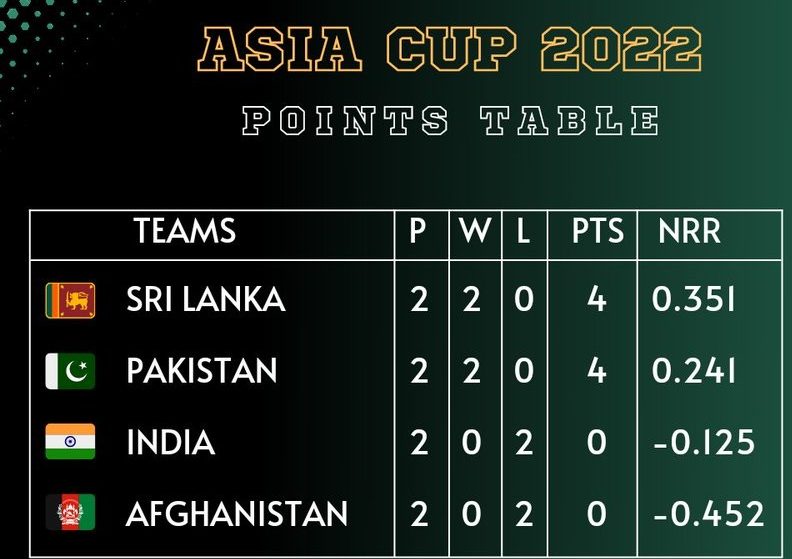 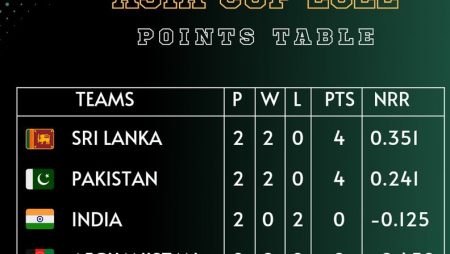 Here is the 2022 Asia Cup Points Table following the match between Afghanistan and Pakistan. Pakistan dashed India’s and Afghanistan’s hopes of reaching the tournament’s finals.

Pakistan advanced to the finals of the 2022 Asia Cup tournament with a thrilling Super 4 victory over Afghanistan on Wednesday. Afghanistan needed a win to stay in contention for the finals, but Pakistan dashed their hopes in the final over. Naseem Shah, Pakistan’s young pacer, smashed two back-to-back sixes in the final over to lead the team to a memorable victory at Sharjah Cricket Stadium.

Afghanistan’s opening pair of Hazratullah Zazai and Rahmanullah Gurbaz. Started well with a quick 36-run partnership for the first wicket after Babar Azam won the toss and decided to bowl first. Haris Rauf’s wicket of Gurbaz in the fourth over gave Pakistan the advantage. Mohammad Hasnain removed Zazai in the fifth.

Ibrahim Zadran delivered a critical knock but not support by the other batters in the middle overs. He had the highest score of 35 off 37. But it was Rashid Khan who smashed an unbeaten 18 off 15 to help Afghanistan put up a total of 129/6. Rauf took two wickets for Pakistan while conceding only 26 runs in his four-over spell.

As Pakistan were in early trouble, right-arm pacer Fazalhaq Farooqi dismiss Babar Azam on the second delivery, while Fakhar Zaman was run out on five runs. Rashid Khan removed Mohammad Rizwan (26 off 20) after he tried to establish some momentum.

Then, in the 17th over, Rashid dismissed middle-order batters Iftikhar Ahmed (30 off 33) and Shadab Khan (36 off 26), bringing Pakistan back into the game with a crucial 42-run partnership for the fourth wicket.

Pakistan needed only 25 runs in the final three overs. But Farooqi changed the game by taking two big wickets in the 18th over, one each of Khusdil Shah and Mohammad Nawaz. Fareed Ahmad also took two wickets in the next over, putting Afghanistan in command of the match. Naseem Shah, however, smashed two back-to-back sixes on the first two balls of the 20th over to give Pakistan a stunning victory.

With this victory, Pakistan has moved into second place in the 2022 Asia Cup table, with four points. Afghanistan remains at the bottom of the table, with no points from two games.

The Points table after the Afghanistan-Pakistan game looks like this: