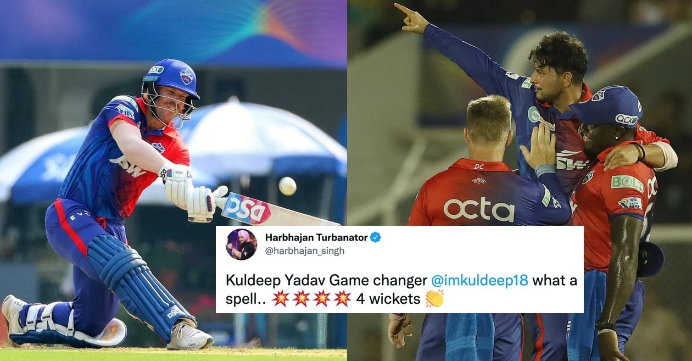 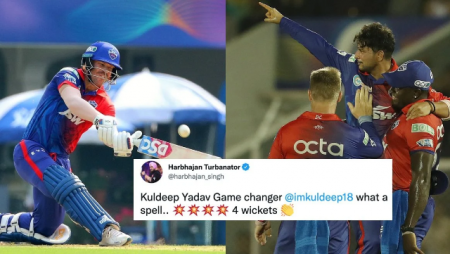 Twitter Reacts to Kuldeep Yadav IPL 2022 Spell Against His Former Team. Kuldeep Yadav returned with 4-35 against his former team, the Kolkata Knight Riders, to help Delhi Capitals win by 44 runs.

Kuldeep Yadav’s dream spell on Sunday blew away his former team, the Kolkata Knight Riders, as the Delhi Capitals won by 44 runs at the Brabourne Stadium. The left-arm spinner returned with figures of 4-35, his second-best spell in the IPL’s history. Kuldeep dismissed Shreyas Iyer, Pat Cummins, Sunil Narine, and Umesh Yadav, allowing Delhi Capitals to maintain their lead. KKR fell 44 runs short of the target.

Kuldeep’s best IPL spell was 4-20 against the Rajasthan Royals in 2018 for the Kolkata Knight Riders.

Kuldeep struggled with KKR in recent seasons, spending most of his time on the bench. However, after taking the wickets of the KKR batters, the spinner celebrated wildly.

The left-arm spinner appeared in nine games for KKR in the 2019 season, but only five in the following season. Due to an injury, the spinner miss the tournament in 2021 and was later release by the team ahead of the mega auction.

In an interview with Sportskeeda, he stated: “Kuldeep Yadav has a track record of winning matches. But he is also someone who must be well manage. Moreover, He suffers from depression if hes not given the bowling or drop from the team. When Dinesh Karthik and Eoin Morgan were captains at KKR, he sit at home and not even be a part of the squad. Any match-winner feels the pressure when you act like this.”

In the match between KKR and DC, the former won the toss and chose to bat first. David Warner and Prithvi Shaw also scored 61 and 51 respectively to help the Delhi Capitals reach 215/5 in 20 overs.

Also Read: Ravi Shastri believes Jadeja should have take over as CSK captain after MS Dhoni.