T20 Blast 2022: WAR vs NOT  Match Prediction – Who will win the match between Warwickshire and Nottinghamshire? 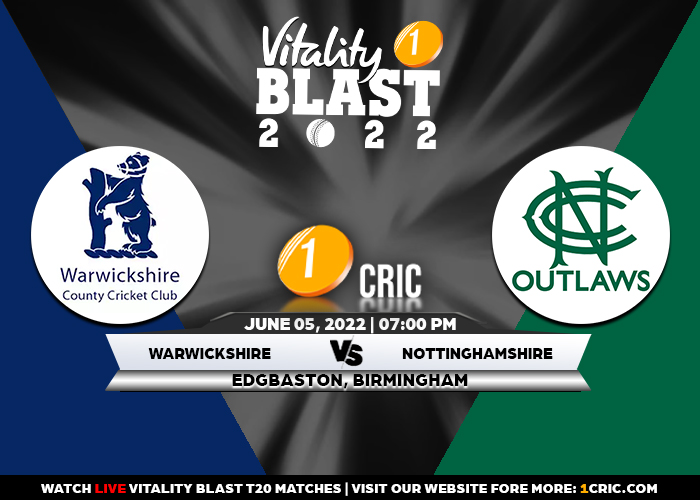 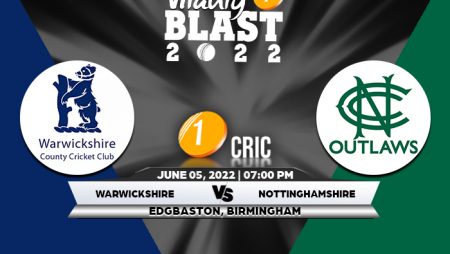 Warwickshire and Nottinghamshire will square off in the upcoming T20 Blast 2022 match, which will be played on June 5 at the Edgbaston Cricket Ground in Birmingham (Sunday). Both teams have a strong batting lineup and will want to perform well in the upcoming match.

In the North Group points table, Warwickshire have won three of their five matches and are ranked second in the team standings. They did, however, lose their previous match against Worcestershire. Notts, on the other hand, have won two of their four games and are fifth in the points table.

Also Visit: Babar Azam disagrees with the chief selector on the role of Shan Masood.

Match Details WAR vs NOT

The pitch at Edgbaston has aided both batters and bowlers. Earlier in the game, the new-ball pacers get some swing, but as the game progresses, batting on the track becomes easier and batters can play through the time. The skipper who wins the toss may choose to chase.

Probable Playing XIs for WAR vs NOT

During Notts’ final group stage match, England batter Alex Hales was destructive. The right-handed batter smashed 91 runs in 33 balls while maintaining a strike rate of 275.76. Hales also hit 12 fours and five sixes to lay the groundwork for his team. The talented batter will look to maintain his good form in the next match.

Pacer Jake Ball was impressive in his last outing, taking four crucial wickets while conceding 40 runs in his four-over quota. Ball has a sharp bouncer as well as a deceptive slower delivery. He’ll be looking to repeat his performance in the next match.

Also Read: T20 Blast 2022: KEN vs MDX Match Prediction – Who will win the match between Kent and Middlesex?