T20 Blast 2022: KEN vs MDX Match Prediction – Who will win the match between Kent and Middlesex? 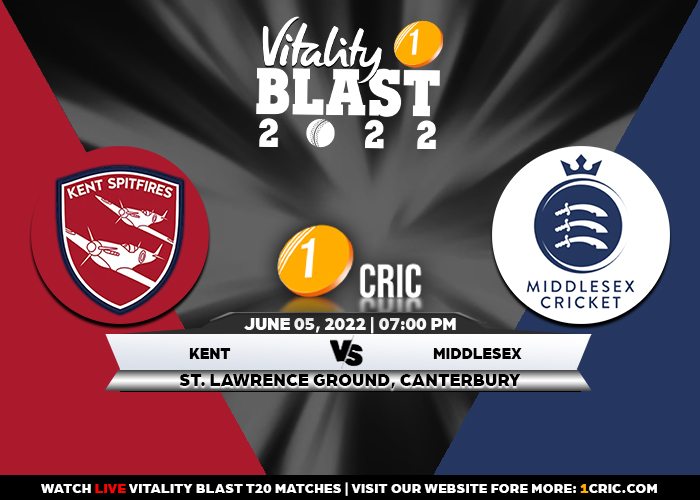 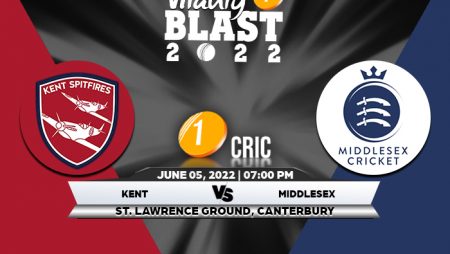 T20 Blast 2022: KEN vs MDX Match Prediction – Who will win the match between Kent and Middlesex? Kent would be desperate to earn their first T20 Blast points this season.

On June 5, Kent will face Middlesex in a T20 Blast 2022 South group match at the St Lawrence Ground in Canterbury. Both teams will need to improve their performances as the tournament progresses. Not long ago, Middlesex were the table-toppers, but a loss in the previous match changed that. They are currently in third place, with three wins and one loss from four matches played so far, totaling six points. Middlesex suffered a five-wicket defeat to Sussex in their last game and will be eager to get back on track.

Kent, on the other hand, has a lot of work to do after a disappointing season so far. They are currently ranked eighth in the standings, having played five games and losing all of them. They desperately need a win to get their first points. Hampshire has played one fewer game than them, but Kent’s NRR is slightly higher. In their most recent match, Kent were defeated by Surrey by 32 runs.

Also Visit: Mondli Khumalo, South African cricketer, has out from a coma after being attacked in a UK pub.

The Canterbury pitch is excellent for batting, and batters are expected to score heavily in this match. A run-fest is undoubtedly in the cards here, as this venue is known for hosting high-scoring contests. Any total greater than 180 is difficult here. While the conditions are favorable for batting, the captain who wins the toss will not hesitate to bowl first.

Middlesex skipper Stephen Eskinazi has been consistent on the 22 yard line this season. He has already scored 157 runs in four innings and appears to be in good form. Stephen got off to a good start in the previous game against Sussex, but he couldn’t convert it into a big knock, as he was dismissed for an 18-ball 31. The Middlesex captain will be looking to hit a game-winning knock in the upcoming match.

Toby Roland-Jones has been a standout for Middlesex with the ball in his hands. He may have given up 40 runs in three overs against Sussex at an economy rate of 13.3, but he also took two wickets. Toby has nine wickets to his name so far and would like to add more to his tally as Middlesex look to return to the top two.

Also Read: “Cricketers in India and Pakistan want to play against each other:” Mohammad Rizwan