Suryakumar Yadav receives appreciation from Virender Sehwag. ‘Such shots are next to impossible’ 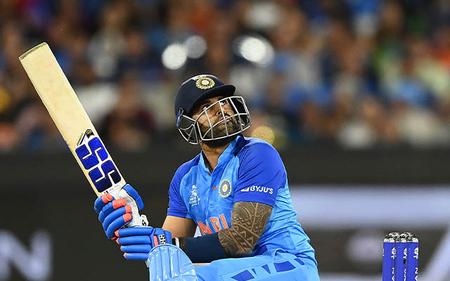 Suryakumar Yadav receives appreciation from Virender Sehwag. ‘Such shots are next to impossible’. In the semifinal match, Team India faces up against longtime foe England.

In their last Super 12 stage match of the ICC T20 World Cup 2022. Team India easily defeated Zimbabwe by 71 runs. KL Rahul, who batted first, and the flashy Suryakumar Yadav. Who both had brilliant innings that helped the squad score a whopping 186 runs.

The Indian bowlers utterly humiliated Zimbabwe in response to the enormous score, giving India two points and a spot in the semifinal match. Suryakumar Yadav has surely been one of the athletes who have maintained outstanding form for team India.

Former India international and aggressive hitter Virender Sehwag praised the batter for his daring performance against the African country.

Read also: Michael Clarke on Australia’s performance in the 2022 T20 World Cup-‘Picked an aggressive side yet played so defensively, that’s very un-Australian’

Only one match away from competing in the championship game

India, however, is only one match away from competing in the championship game and winning the prized trophy. The Men in Blue will, however, have a challenging foe in England, a group that has excelled with both the ball and the bat.

India, on the other hand, has also proven deadly in their own ways, and the boys believe that if they play their best cricket against the Three Lions, they will make things more difficult for them. Rohit Sharma and company will try to keep up the incredible performance they have shown throughout the competition. The match is slated to take place at Adelaide Oval on Thursday, November 10.

Read also: The former captain of India, Mithali Raj, praises Rohit Sharma’s leadership abilities: “I believe some of his judgments have been outstanding.”