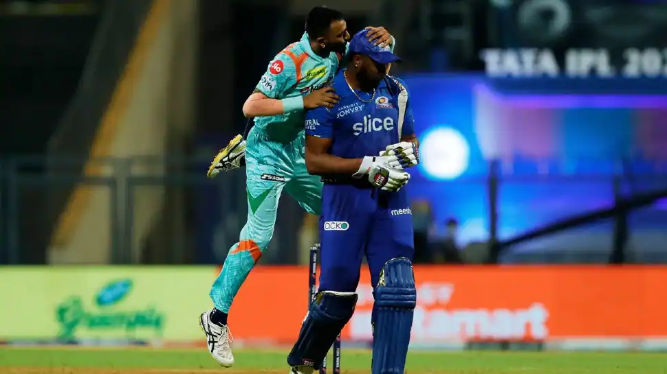 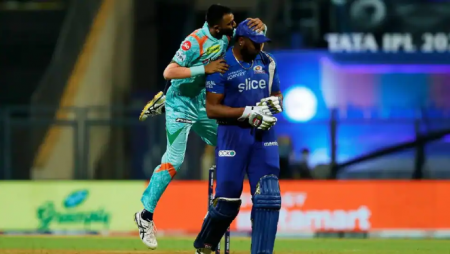 Sunil Gavaskar Is UnImpressed By Krunal Pandya’s Send-Off In LSG vs MI IPL 2022 Match. Sunil Gavaskar, former India captain, said Krunal Pandya was fortunate that Kieron Pollard did not react after the spinner’s dismissal of the Mumbai Indians batter.

Former India captain Sunil Gavaskar has said that Lucknow Super Giants batsman Krunal Pandya is lucky that Mumbai Indians batter Kieron Pollard did not react after the spinner gave the all-rounder a ‘kiss’ send-off during Sunday’s Indian Premier League (IPL) match. Krunal had fired Pollard and celebrated by kissing the right-hander on the cheek. Pollard then simply walked to the dugout with no apparent reaction.

“And I’m sure he won’t like it, No! No! That has to happen once the game is over, no matter how close your friends are. He is fortunate that Pollard did not intervene “Gavaskar said this while commentating on Star Sports.

LSG vs MI IPL 2022: Krunal’s celebration after dismissing Pollard criticized by former India players Parthiv Patel and RP Singh as “a little over the top.”

“Nobody enjoys losing. When a player isn’t performing well, such things should be avoided. You have no idea what emotions he is experiencing. What if Pollard had turned around and reacted? He was walking back, dissatisfied with his inability to win matches, and his reaction was clearly excessive “Cricbuzz spoke with RP Singh.

Pollard also dismissed Krunal in the match between Mumbai Indians and Lucknow, and the left-hander managed just one run.

“Krunal and Pollard are good friends off the field, but things are a little different. The emotions are distinct. Pollard hasn’t been able to put up runs. In addition, Mumbai has been losing. At that point, it’s critical to give people space. You can have as much fun in the locker room as you want for the entire year. However, I believe this reaction was a little exaggerated “Cricbuzz spoke with Parthiv.

Pollard took two wickets and scored 19 runs in the game between LSG and MI. Krunal, on the other hand, scored just one run but took three wickets, including Rohit Sharma, Pollard, and Daniel Sams.

On Sunday, the Lucknow Super Giants defeated the Mumbai Indians by 36 runs, moving them to fourth place in the IPL points table. Batting first, LSG scored 168/6 in 20 overs, thanks to skipper KL Rahul’s second century of the ongoing IPL season.

Mumbai Indians fell 36 runs short of a 169-run target after being restricted to 132/8. Krunal Pandya took three wickets for the Lucknow Super Giants, while Mohsin Khan, Jason Holder, Ravi Bishnoi, and Ayush Badoni each took one.

Also Read: Match 39: IPL 2022 RCB vs RR Prediction for the Match – Who will win the IPL Match Between RCB and RR?