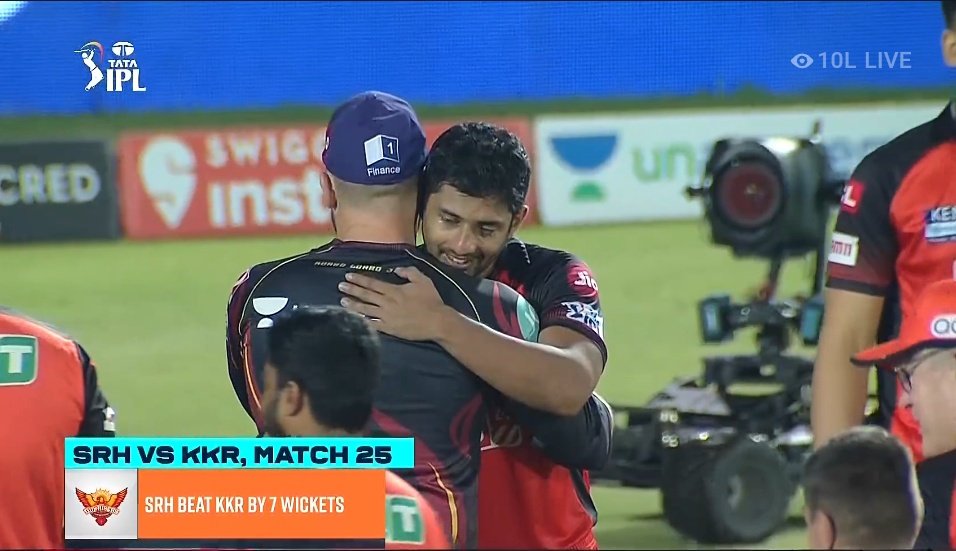 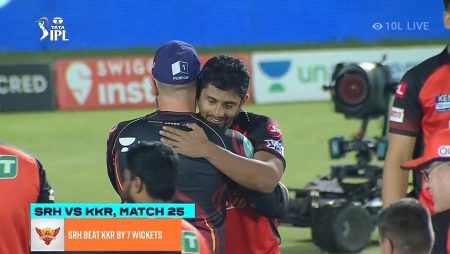 SRH won their third game in a row in the ongoing IPL 2022 season, defeating Kolkata Knight Riders by seven wickets on Friday at Brabourne Stadium. SunRisers Hyderabad chased down 176 with 13 balls to spare, led by Rahul Tripathi and Aiden Markram. Following the conclusion of the match, Tripathi seen receiving a warm hug from KKR coach Brendon McCullum, and the two then engage in a conversation that made both of them laugh.

Tripathi was with KKR until last season, when he use as a floater.

After the match against SRH, Tripathi was greeted with a warm hug from KKR coach McCullum.

Following the conclusion of the match, Also Tripathi seen interacting with KKR all-rounder Andre Russell, as well as a few other KKR players.

Moreover, Chasing 176, Rahul Tripathi smashed 71 runs off 37 balls, including four fours and six sixes. Andre Russell finally sent him back to the pavilion in the 15th over of the game.

Earlier, Nitish Rana and Andre Russell scored 54 and 49 runs, respectively, as KKR finished with a total of 175/8 in 20 overs.

With this loss, KKR has fallen to fourth place in the points table, while SRH has risen to seventh place with six points from five games.