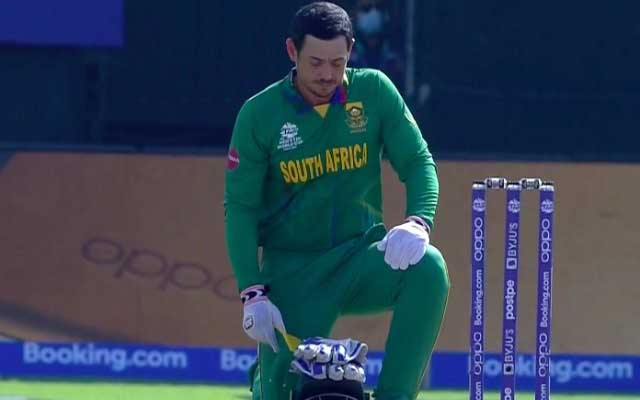 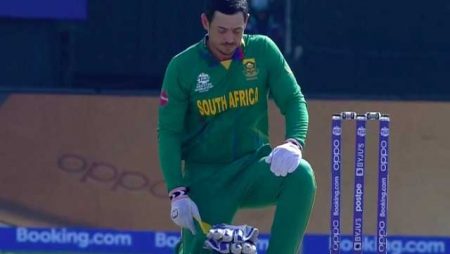 Quinton de Kock breaks his silence on his refusal to take a knee in the T20 World Cup in 2021. De Kock received widespread condemnation for refusing to perform the gesture.

Quinton de Kock, a veteran wicketkeeper-batter, landed in hot water last year when he defied Cricket South Africa’s directive to take a knee before every match in the T20 World Cup 2021. Because the southpaw refused, he did not play in the team’s group-stage match against West Indies. The Proteas players were reportedly asked to take a knee in solidarity with the ‘Black Lives Matter’ campaign.

De Kock received widespread condemnation for refusing to perform the gesture. Clarifying his stance at the time, the left-handed batter stated that he felt his rights had been violated. He even apologized to the fans and repeated the gesture in the remaining games after rejoining the starting lineup. De Kock has now shed light on the entire saga, stating that he would not have done anything differently.

Also Visit: Rahul Chahar on Dismissing India Legend: “It Was A Different Feeling”

We all stand firm in our convictions: Quinton de Kock

He even chastised CSA for making the gesture mandatory for all players halfway through the tournament. “There is nothing I would have done differently.” We all stand firm in our convictions. I’m aware of how I am. I’m aware that I’m not a bad person. I have nothing to hide. That’s why I wasn’t scared,” De Kock was quoted in the Times of India as saying.

“I believe the board members or whoever gave that directive (to take a knee) could have done things differently, not just in the middle of a World Cup the morning before a game.” It was unnecessary to apply pressure to the players. “We had a lot of kids on the team,” he added.

De Kock went on to say that cricketers are influencers, not activists, and that they can help bring about social change. He went on to say that while there are people who make genuine contributions behind closed doors, the world recognizes those who express themselves on social media. “We’re cricketers, but we’re also influencers.” “We may not be able to change much in the communities, but we can help spread awareness,” said the 29-year-old.