PAK vs AUS: Babar Azam Celebrates Century While Still On 99 Not Out 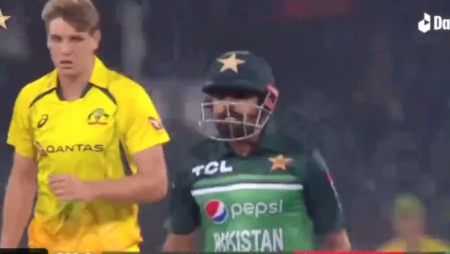 When Babar Azam celebrated his century against Australia on the third ball of the 41st over at the Gaddafi Stadium in Lahore, few knew what had happened. Normally, when a player scores a hundred points, the home crowd erupts in joy and sings praises to the player. Despite the home team captain jumping in the air and pumping his fist to celebrate his 15th ton nothing of the sort was on display. The catch was that Babar was still on 99 not out when he punch the air in joy after running two runs.

The hilarious incident was even acknowledge by the players on the field.

Babar Azam Celebrates Century While Still On 99 Not Out

Normalcy was restored on the very next ball, when Babar hit a magnificent century to help his team chase down a record total of 349 runs.

This was Pakistan’s most successful run-chase in one-day international cricket history.

Earlier, Australia score 348 runs on a flat deck in Lahore, which appeared to be a series-clinching total. The total could have been much higher if pacer Shaheen Afridi had not finished with a four-wicket haul.

On April 2, the final ODI to be played at the same venue.