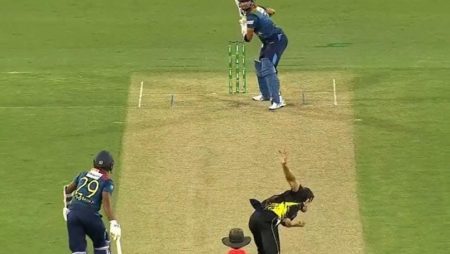 Mitchell Starc’s Off-Broadway Debut Doesn’t Go As Planned In Shocking Delivery. Mitchell attempted a slower off-cutter. But the ball slipped from his grasp, resulting in one of the most bizarre deliveries ever witnessed.

Starc returned to Australia’s playing XI after missing the second T20I. As the hosts made a few changes to their team against Sri Lanka in the third T20I. Of the five-match series on Tuesday at the Manuka Oval in Canberra. After Australia won the toss and chose to bowl, Starc became the focus of attention due to an errant delivery. Starc also went for a slower off-cutter in the fifth ball of the 18th over. But the ball slipped out of his hands and landed near second slip.

Also Visit: Mickey Arthur: To improve their test side, England must prohibit their players from participating in the IPL.

Even the commentators couldn’t stop laughing as the bowl flew three meters above the ground.

“Cam Green’s not getting a hold of that,” one of them was overheard saying.

Australia took an unassailable 3-0 lead in the five-match series on Tuesday after winning the first two games at the Sydney Cricket Ground.

Kane Richardson led Australia’s bowling attack as they restricted Sri Lanka to a low-scoring total of 121 for six.

In response, Glenn Maxwell and skipper Aaron Finch delivered with the bat as the hosts won by 6 wickets and 19 balls.

Sri Lanka will now look for a consolation win or two in the final two games, which will be played on February 18 and 20 at the Melbourne Cricket Ground.