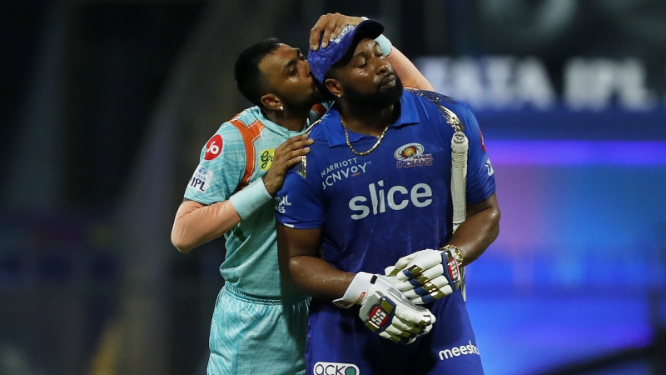 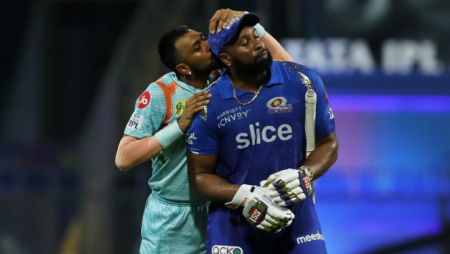 Krunal Pandya bowled a brilliant spell, taking three wickets against Mumbai Indians to help Lucknow Super Giants win by 36 runs at Wankhede Stadium on Sunday, moving them to fourth place in the IPL points table. Krunal also bowled former Mumbai Indians teammate Kieron Pollard and celebrated the wicket by kissing the right-hander on the cheek. Pollard, on the other hand, had no reaction and simply walked away.

Pollard had also struck out Krunal earlier in the game, and the left-hander had only managed one run. Krunal, on the other hand, ended up dismissing the batter from the Caribbean.

“I was so thankful that I got his (Pollard’s) wicket otherwise he would have eaten my brain throughout my life because he got me out and now that it’s 1-1 at least he will speak less,” Krunal said after the game to Star Sports.

Krunal took the wickets of Rohit Sharma, Pollard, and Daniel Sams in the match against the Mumbai Indians. In addition, the left-arm spinner worked with Jason Holder to dismiss Jaydev Unadkat.

Also Visit: Will Benny Howell Make His Make a big appearance For The Group In IPL 2022, PBKS Anticipated XI vs CSK?

LSG vs MI: LSG defeated the MI by 36 runs on Sunday, moving them into fourth place with 10 points from eight games.

Rahul smashed 12 fours and four sixes in an unbeaten 103-run knock. Mumbai Indians fell 36 runs short of a 169-run target after being restricted to 132/8.