Josh Hazlewood will play in the Sri Lanka T20Is at home. 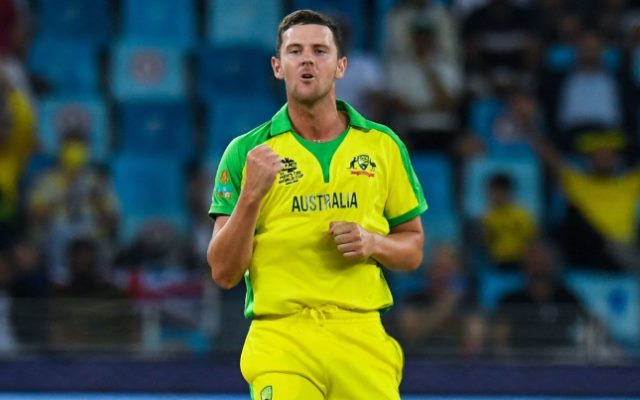 Josh Hazlewood will play in the Sri Lanka T20Is at home.

The five-match Twenty20 International series between Australia and Sri Lanka is set to begin on February 11.

Australia pacer Josh Hazlewood is set to make his international debut against Sri Lanka. In a five-match T20I series at home. He hasn’t played since suffering a side strain during the first Ashes match in Brisbane. Australia eventually won the five-match series 4-0. He was scheduled to make a comeback against the Kiwis at home. But the series was postponed due to COVID-19 restrictions in New Zealand for visitors from other countries.

Hazlewood sustained the injury on the third day of the first game at the Gabba. He didn’t bowl enough overs on the day. As England skipper Joe Root and Dawid Malan threatened to stage a comeback at the end of the day.

Meanwhile, the right-arm pacer expressed his disappointment at missing the Ashes but praised his team’s performance. He also stated that now that the New Zealand series has been postponed, he can relax.

“It’s been a frustrating couple of weeks, no doubt, watching away on TV with the rest of the country, but the boys have been fantastic,” he said, according to ESPNCricinfo, at the announcement of the 2022 Men’s T20 World Cup fixtures in Sydney. “Definitely back for the Sri Lankan T20s; I can take it a little easier now that New Zealand isn’t coming; I’ve got a couple of weeks up my sleeve to get it right.”

Read more: India and Pakistan will face off in the opening match of the 2022 T20 World Cup.

Josh Hazlewood excited to play in the IPL.

The 31-year-old added that he expects to play a role in his country’s victories and is excited to play in the upcoming season of the Indian Premier League (IPL). However, he also stated that, given the demands of international cricket these days, he cannot play every game for his country.

“I expected to play a role in Australia’s victories and get a game here and there in the IPL, but having the opportunity to play four games in a row is huge.” Each game teaches you something new, and they are all unique. It definitely exceeded my expectations in that format, but I was quietly confident in my ability to play my part.

One Reply to “Josh Hazlewood will play in the Sri Lanka T20Is at home.”