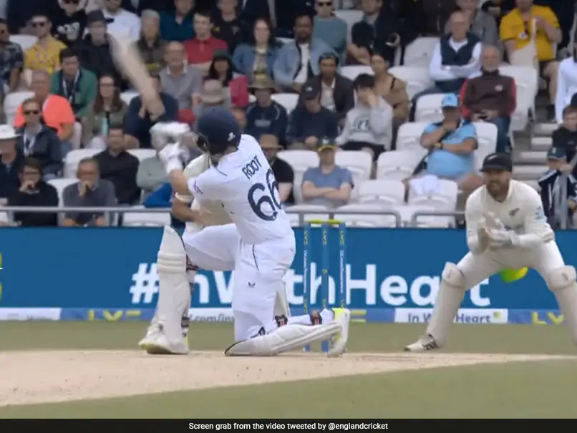 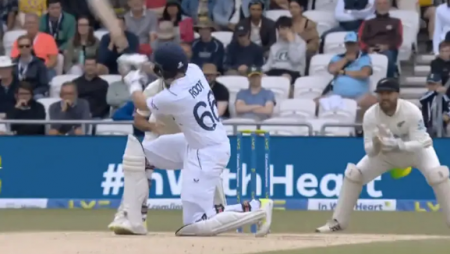 With each passing day, England’s revitalized approach to Test cricket under Ben Stokes and Brendon McCullum continues to awe viewers with their exciting brand of cricket. While players like Ben Stokes and Jonny Bairstow have wowed fans with their aggressive batting. Joe Root, a more traditional Test batter, is also getting in on the act. Root stunned Twitter with an outrageous reverse-scoop off pacer Neil Wagner on Day 4 of the ongoing third Test against New Zealand at Headingley in Leeds, also with England chasing 296 to complete a series sweep.

Running in from over the wicket, left-handed Wagner bowled one full and across Root, and also England’s star batter was quick to change stance and scoop the ball over the third man boundary.

Moreover, The England Cricket Board simply stated on Twitter after sharing the video: “Root, Joe You are absolutely ridiculous.”

Also Read: Sri Lanka has named an 18-man squad for the Test series against Australia.

Watch: The daring shot by Joe Root off Neil Wagner

Joe Root finished the day unbeaten on 55, while Ollie Pope was batting on 81. On Day 4, England were 183/2 at Stumps, needing another 113 runs to win the match and complete a 3-0 whitewash over New Zealand.

However, Daryl Mitchell’s third century in as many matches this series helped New Zealand score 329 in their first innings.

After that, half-centuries from Tom Blundell, Tom Latham, and Daryl Mitchell helped New Zealand set England a target of 296 runs.