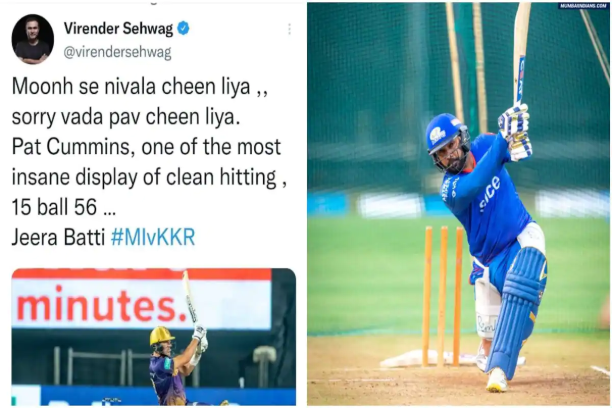 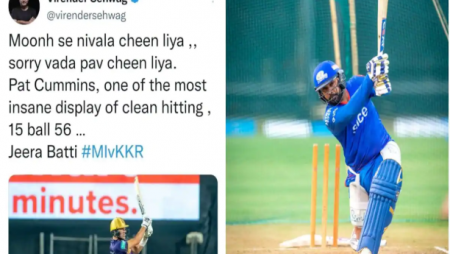 Former Team India player Virender Sehwag chastise for his ‘Vada Pav’ tweet. Which he sent after the Kolkata Knight Riders (KKR) defeat the Mumbai Indians (MI) thanks to Pat Cummins’ aggressive innings. Moreover, Sehwag remarked, in his characteristically witty style: “Sorry, vada pav cheen liya, moonh se nivala cheen liya Pat Cummins, one of the most mind-boggling displays of clean hitting, 15 ball 56… Jeera Batti, “after Pat Cummins hit a brilliant 56-run knock off 15 balls to help his team record a memorable victory on Wednesday. This tweet apparently did not go over well with MI or Rohit fans, and Sehwag force to clarify his position on the matter.

Taking to Twitter once more, Sehwag stated that his ‘Vada Pav’ reference was for Mumbai and that Rohit’s fans should relax and not be concern.

“The Vada Pav allusion is to Mumbai, a city that thrives on Vada Pav. Rohit fans, thanda lo, I am a much bigger fan of his batting than most of you.”

Sehwag’s initial reaction was also a result of Pat Cummins going ballistic in only 15 balls.

The Australian pacer for Kolkata Knight Riders (KKR) had turned the game on its head with a 14-ball fifty, which helped his team win their third match of the season by five wickets.

In the process, Cummins equaled the IPL record for the fastest half-century, which he now shares with KL Rahul.

The knock was met with applause from all quarters, including Sehwag.

Also Read: During my 1st season with RCB, I was completely depressed: Robin Uthappa