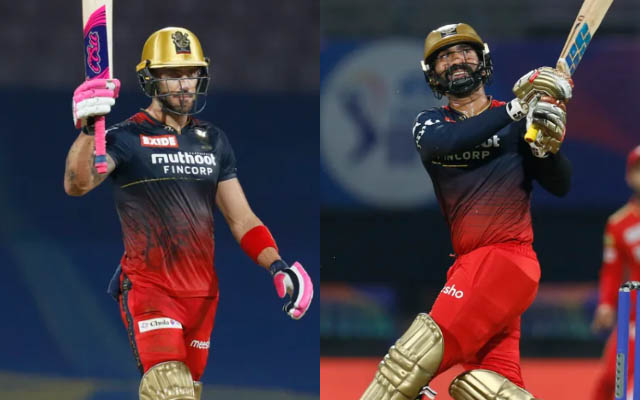 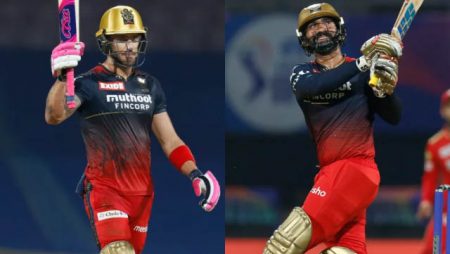 Royal Challengers Bangalore needed 7 runs off the last six balls with only three wickets in hand, but experienced Dinesh Karthik held his nerve to hit a six and a four to lead RCB to a three-wicket win over Kolkata Knight Riders on Wednesday at the Dr DY Patil Sports Academy in Navi Mumbai. Karthik was saved for the death overs, and he duly delivered when called upon. RCB captain Faf du Plessis praised the experienced wicketkeeper-batter, comparing his calmness in the death overs to the legendary MS Dhoni, with whom du Plessis has shared the dressing room for several years.

“DK’s experience came in handy in the end, and cool-calm runs were never far away. In the last five overs, he’s probably as calm as MS Dhoni can be “In a post-match presentation, Faf du Plessis said

Chasing 129, RCB got off to a shaky start, with Umesh Yadav and Tim Southee reducing them to 17/3 in the Powerplay with some brilliant bowling.

Following that, RCB had to play cautiously, resulting in a simple change becoming a low-scoring thriller.

Also Read: After opening-day defeats, CSK and LSG are looking to improve their top-order batting.

“I’m very pleased. Good win, obviously chasing small scores, you want to be positive and not leave it too late, but their seamers bowled well “explained Faf du Plessis

Punjab Kings chased down RCB’s total of 205 in their season opener at the same venue.

“Tonight there was seam and bounce, the first night it swung a bit more,” the RCB captain said of the pitch difference between the two matches.

Despite the victory, du Plessis believes his team should have finished the match stronger, despite bowling out Kolkata Knight Riders for 128 in 18.5 overs.

“It was 200 v 200 two or three days ago. Tonight’s game was 120 v 120, which was pretty good. We would have preferred to have won more convincingly in an ideal world, but a win is a win “Faf du Plessis informed me.

The Faf du Plessis-led side has won their first match of the season and will now face the Rajasthan Royals in their next match on April 5.