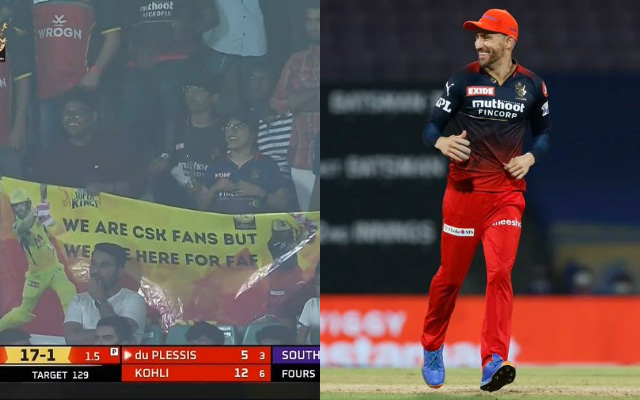 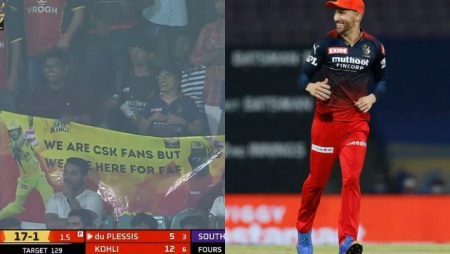 Faf du Plessis, a former Chennai Super Kings opener, has left the defending champions to captain the Royal Challengers Bangalore in the Indian Premier League (IPL) 2022 season. Fans of the Yellow Army, on the other hand, continue to adore the former South African star.

A swarm of CSK fans gathered at the Dr. DY Patil Sports Academy in Navi Mumbai to watch Match 6 between RCB and the Kolkata Knight Riders to show their support for Du Plessis. The fans displayed a large banner proclaiming that they had come to support their former opener, who is now leading RCB in his new avatar.

Also Visit: Faf du Plessis heaps praise on Dinesh Karthik, saying, “As cool as MS Dhoni can get in the last 5 overs.”

“We are CSK supporters, but we are here to support Faf du Plessis.”

On social media, a photo of CSK fans holding up the massive banner at the Dr. DY Patil Sports Academy went viral.

Meanwhile, RCB pipped the two-time champions KKR to the top of the points table. RCB nearly choked while chasing a 129-run target. However, RCB went on to win the match by three wickets with four balls remaining, thanks to some lusty blows from Harshal Patel and Dinesh Karthik.

The two-time champions would have liked to see their new captain, Shreyas Iyer, play a captain’s knock. However, he also failed, making only 13 runs. The ‘Men in Purple’ eventually scored 128 runs while losing all of their wickets in 18.5 overs.

The Red Army lost their first wicket with only one run on the board while chasing 129 for victory. The real damage, however, was done when both skipper Du Plessis and Virat Kohli were dismissed in quick succession, leaving RCB at 17/3 in 2.1 overs. However, RCB recovered from the early setbacks and won the game in the final over.