IND versus SA: Match Referee Javagal Srinath humorously forgets to throw out a coin during the coin toss. 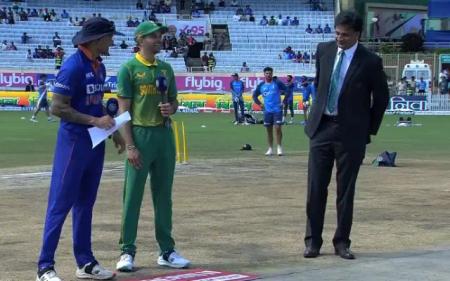 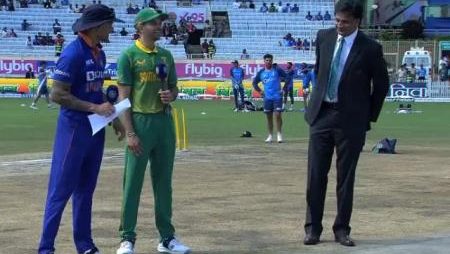 IND versus SA: Match Referee Javagal Srinath humorously forgets to throw out a coin during the coin toss. In the second ODI, South Africa won the toss and opted to open the batting.

In a humorous incident that occurred during the toss of the second One-Day International between India and South Africa. Former Indian fast bowler and match official Javagal Srinath was involved. Both skippers were present for the coin toss along with Srinath after Sanjay Manjrekar welcomed everyone to the game. Manjrekar then inquired as to who had the coin toss.

After a brief moment of confusion, Shikhar Dhawan and Keshav Maharaj realized that Srinath had not yet given them the coin. Dhawan and Maharaj were grinning, while Srinath also found the humor in it.

Watch Javagal Srinath forgetting to give the coin in this video.

“We are gonna have a bat, looks like a good wicket. Shamsi and Temba didn’t wake up feeling too well this morning, so Reeza Hendricks and Bjorn Fortuin are coming in for them. Hopefully we can try and utilize the conditions, assess it upfront and play it from there.”

Maharaj said at the toss.

Ruturaj Gaikwad and Ravi Bishnoi, who represent India, were absent, while Shahbaz Ahmed made his debut abroad. Washington Sundar also made a long-awaited comeback to the XI to increase the batting lineup. India needs to win game two of the three-match series against South Africa in order to keep the series alive. South Africa currently leads the series 1-0.

Read also: Prior to the tri-series, Mitchell Santner has been given cover by Blair Tickner while Santner is on paternity leave