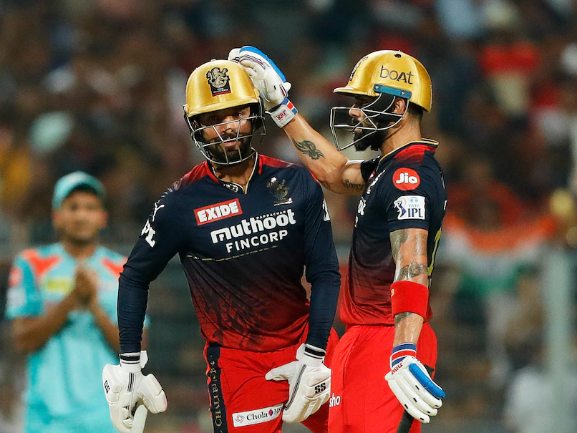 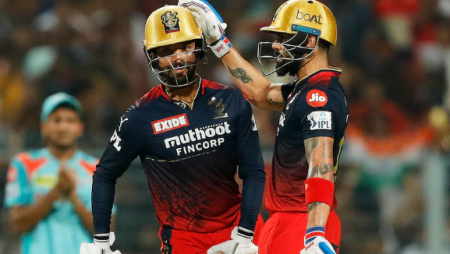 Rajat Patidar’s match-winning ton put Royal Challengers Bangalore two victories away from their first IPL title, according to Virat Kohli. Patidar hit an unbeaten 112 to become the first uncapped player in Twenty20 tournament history to score a century in the play-offs as Bangalore defeated Lucknow Super Giants on Wednesday. The Faf du Plessis-led side will face Rajasthan Royals in Friday’s second qualifier in Ahmedabad. With the winners facing Gujarat Titans in the final two days later at the same venue.

Kohli praises Patidar, a top-order batsman who was drafted into the side as an injury replacement midway through the tournament.

“I’ve seen many impact innings and many innings under pressure over many years, but I’ve never seen anything better than how Rajat played today,” Kohli said in a post-game interview with man of the match and teammate Patidar.

Patidar put on crucial partnerships, including a 66-run stand with Kohli (25), and 92 runs with in-form wicketkeeper-batsman Dinesh Karthik (37 off 23 balls).

Patidar led Bangalore to 207-4, which their bowlers defended by holding Lucknow to 193-6. Josh Hazlewood, an Australian pace bowler for Bangalore, took three wickets.

“There were a few tense moments, obviously it was a big game, but I think our bowlers held their nerve very well,” said Kohli, 33, who has three “golden ducks” this season in the IPL.

Bangalore is in the play-offs for the third year in a row, but their best IPL finish has been two runners-up finishes in 2009 and 2016.

“I can’t wait to get to Ahmedabad and get back on the field,” Kohli said.

“We are overjoyed and pleased with how things have turned out.” We simply want to advance in this tournament.

“Hopefully two more games and then we all can celebrate.”

Also Read: Rajat Patidar hits a six to reach a century in the IPL 2022 Eliminator.