Rajat Patidar hits a six to reach a century in the IPL 2022 Eliminator. 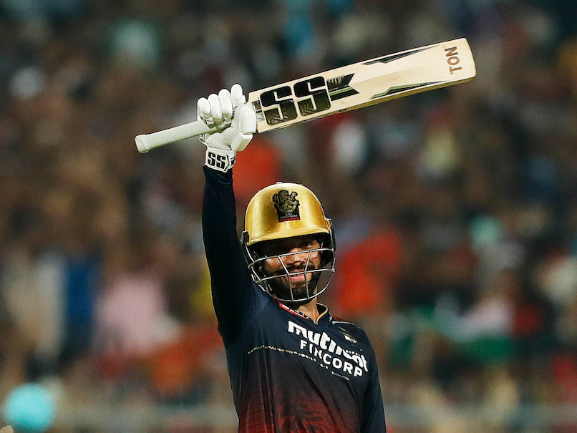 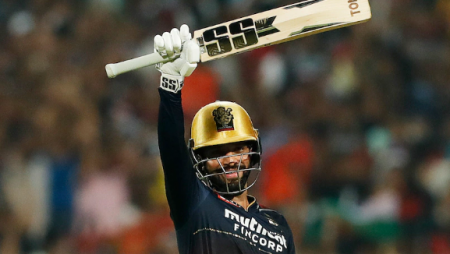 Rajat Patidar hits a six to reach a century in the IPL 2022 Eliminator.Rajat Patidar completed his stunning century against LSG in the Eliminator with a pull shot off Mohsin Khan.

Rajat Patidar of Royal Challengers Bangalore became the first uncapped player in Indian Premier League (IPL) history to score a century in the playoffs on Wednesday. The batter accomplished this feat during his team’s Eliminator match against the Lucknow Super Giants at the Eden Gardens in Kolkata. Patidar had a memorable day on the field. Scoring an unbeaten 112 off 54 balls to lead his team to a massive total of 207/4 at the end of their 20 overs. LSG’s response was only 193/6.

Patidar reached 100 off 49 balls, including a six off Mohsin Khan in the 18th over.

Also Visit: Mohammad Kaif Explains Why LSG Have a “60-40” Advantage Over RCB in the IPL 2022 Eliminator.

Watch: Rajat Patidar hits his ton with a fantastic six.

He also became the first player from his team to hit a century in the playoffs. Surpassing Chris Gayle’s 89-run knock in the league’s second qualifier against the Mumbai Indians in 2011. Previously, Manish Pandey had the highest score by an uncapped player in IPL playoffs/knockout matches during the 2014 season. He had previously scored 94 runs for Kolkata Knight Riders against Punjab Kings in the finals.

Overall, he is the league’s fourth uncapped player to hit a century. Manish Pandey was the first, scoring an unbeaten 114 against the now-defunct Deccan Chargers in 2009. Paul Valthaty (120* for Punjab Kings against Chennai Super Kings in 2011.) aDevdutt Padikkal (101* for Royal Challengers Bangalore against Rajasthan Royals in 2021) are the other uncapped players with an IPL century.

His century was also the season’s fastest.