In a tour match against New Zealand, Sussex’s Mohammad Rizwan hits a screamer. 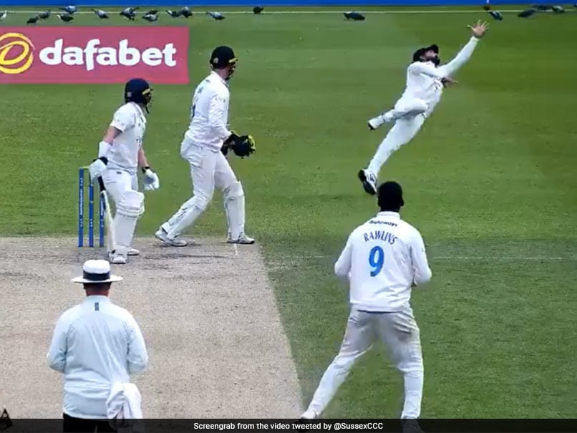 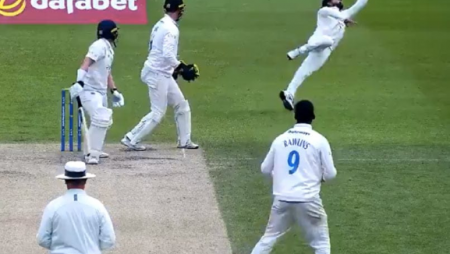 Mohammad Rizwan, a Pakistan wicketkeeper-batsman, is having a successful season with Sussex in the English County Championship. Rizwan, who made his Sussex debut alongside veteran India Test batter Cheteshwar Pujara, made headlines after taking a stunning catch during the Sussex-New Zealand tour match. Delray Rawlins bowled a slightly fuller delivery to Hamish Rutherford, who came down the track and attempted to smash it over long-off for a six on the second delivery of the Kiwi’s 54th over.

Rutherford, however, misjudged it, and Rizwan, who was deployed at mid-off, ran back nearly all the way to long-off and took a spectacular diving catch.

Also Read: Sunil Gavaskar believes this pacer should be in India’s Test and ODIs squads against England.

“WHAT IS A CATCH? Is there anything @iMRizwanPak cannot accomplish?” Sussex shared the video on their official Twitter account.

Also Read: Sunil Gavaskar believes this pacer should be in India’s Test and ODIs squads against England.

It should be noted that Rizwan was a substitute fielder and did not play for Sussex.

After the first day was rained out, the visitors won the toss and chose to bat against the hosts at Hove.

Tom Latham and Will Young both had fifties before retiring with scores of 65 and 55, respectively.

On the stroke of stumps, New Zealand declared their innings at 342 for three.

The Kiwis are in England for three Tests against the Three Lions, with the first taking place on June 2.

Following the conclusion of the current tour match, New Zealand will play a four-day practice match against the First-Class Counties XI in Chelmsford from May 26-29.

Sunil Gavaskar believes this pacer should be in India’s Test and ODIs squads against England.