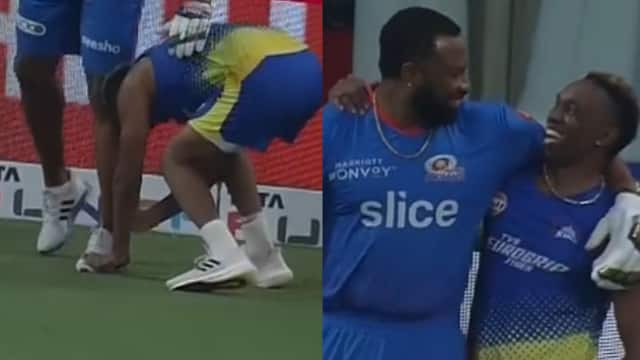 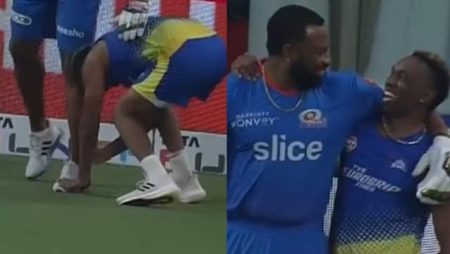 Dwayne Bravo Touches Kieron Pollard’s Feet Prior to MI vs CSK IPL 2022. Bravo of the West Indies greeted compatriot Kieron Pollard by touching his feet before the game between the Mumbai Indians and the Chennai Super Kings.

Dwayne Bravo and Kieron Pollard have a close relationship both on and off the field, with the former frequently referring to the latter as his “best friend.” When the Chennai Super Kings and Mumbai Indians meet in the Indian Premier League, the two are on opposing sides (IPL). Despite the rivalry between CSK and MI, the two West Indians always make time for each other in some way. Pollard and Bravo had a brief interaction before the match on Thursday, and the CSK all-rounder greeted the Mumbai Indians player by touching his feet. Pollard then hugged Bravo and the two talked for a while.

It’s worth noting that Pollard announced his retirement from international cricket on Wednesday night. Pollard was a member of the West Indies’ winning T20 World Cup squad in 2012. He had led the country in the 2021 T20 World Cup in the United Arab Emirates.

The match between the Mumbai Indians and the Chennai Super Kings was a nail-biter, with Ravindra Jadeja’s CSK winning by three wickets on the final ball. CSK needed a special knock from MS Dhoni to cross the finish line.

Dhoni scored 28 runs off 13 balls, including three fours and one six, to lead CSK to victory. Dhoni hit 16 runs off the final four balls in the final over, leaving Mumbai Indians pacer Jaydev Unadkat perplexed.

In the end, Dhoni and Dwayne Bravo remained unbeaten for CSK, with 28 and 1, respectively. Bravo had returned with figures of 2-36 with the ball in hand.

Earlier, CSK pacer Mukesh Choudhary returned with three wickets, limiting Mumbai Indians to 155/7. Rohit Sharma, Ishan Kishan, and Dewald Brevis were all fired by Choudhary. Pollard had 14 runs off 9 balls, including a four and a six.

Tilak Varma top-scored for the Mumbai Indians with 51 off 43 balls, including three fours and two sixes.

CSK now has four points and is ranked ninth in the points table as a result of this victory. Mumbai Indians, on the other hand, are at the bottom of the table after losing all seven of their games.