During Match 39, RCB vs RR:  Riyan Parag and Harshal Patel got into a heated argument. 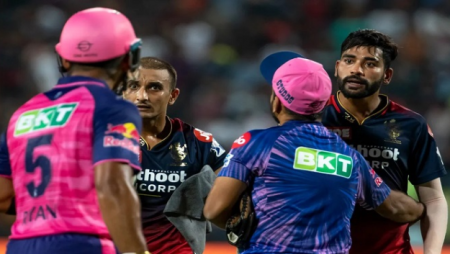 Riyan Parag had a heated exchange with Harshal Patel as Rajasthan Royals faced Royal Challengers Bangalore in Match 39 of the ongoing Indian Premier League (IPL) 2022 season at the Maharashtra Cricket Association Stadium in Pune. The incident occurred following RR’s first innings, in which they scored 144 for eight in 20 overs. With Parag scoring an unbeaten half-century.After the 20th over. Harshal bowled and Parag smacked a four and two sixes, one of which came off the last delivery. The 20-year-old finished the innings with a maximum over cow corner, bringing the total to 18 runs off an over. Following the innings, the Assam native was seen walking off the field. But then turned around and began a heated argument with Harshal, who was stopped by members of the RR support staff.

RCB vs RR: Here’s a video of Parag and Patel argument:

As RR set a target of 145 runs. Parag hammered 56 runs off 31 balls (including three fours and four sixes) and remained unbeaten.

Meanwhile, RCB’s bowling attack was led by Josh Hazlewood, who took two wickets in four overs while conceding only 19 runs.

Parag hasn’t been at his best this season, registering only 104 runs in eight games.

Rajasthan Royals then defended their total and bowled RCB out for 115 to win by 29 runs and move to the top of the table.