Dhawal Kulkarni is set to join the Mumbai Indians squad for the IPL 2022 season. 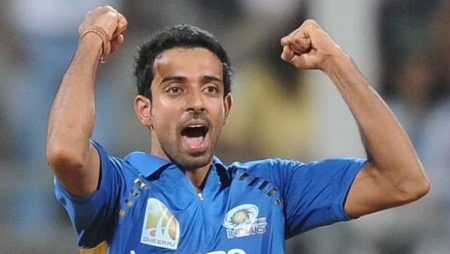 Dhawal Kulkarni is set to join the Mumbai Indians squad for the IPL 2022 season. MI is at the bottom of the team standings after losing their first six games of the season.

Veteran pacer Dhawal Kulkarni is set to join the Mumbai Indians in the ongoing IPL 2022. The pacer, who did not sell in the mega auction, now works as a commentator for Star Sports. He is set to resume his on-field duties. As the five-time champions sign him despite their poor performance in the ongoing competition.

MI is at the bottom of the team standings after losing their first six games of the season, and a couple of more losses could see them eliminated from the playoff race. One of the major reasons for their struggles is their bowlers’ inability to take wickets or contain runs. While pace spearhead Jasprit Bumrah been blown and cold, he receive little help from other bowlers.

As a result of this, MI have added Kulkarni to the squad, as the 33-year-old fast bowler has a wealth of experience. In 92 IPL games, he has taken 86 wickets for MI, Rajasthan Royals, and the now-defunct Gujarat Lions. Kulkarni received INR 75 lakh from MI in the 2020 auction event, and he continued to serve the team in 2021, despite playing only one game.

However, due to MI’s lack of potent bowlers, he is now likely to get more opportunities. “MI captain Rohit Sharma eager to add Kulkarni to their pace attack.” “Being from Mumbai, he knows how to bowl in Mumbai and Pune, where the IPL-15 is being held,” a source told the Times of India.

“With the exception of Jasprit Bumrah, all the MI pacers have struggled this season, and that has been a major factor in the team losing its first six games to suffer its worst start in any IPL edition,” the source added. Meanwhile, MI’s next game will be against their arch-rivals, the Chennai Super Kings, on Thursday (April 21).

Also Read: Ricky Ponting reveals that a former KKR Pacer made his IPL debut because of him.