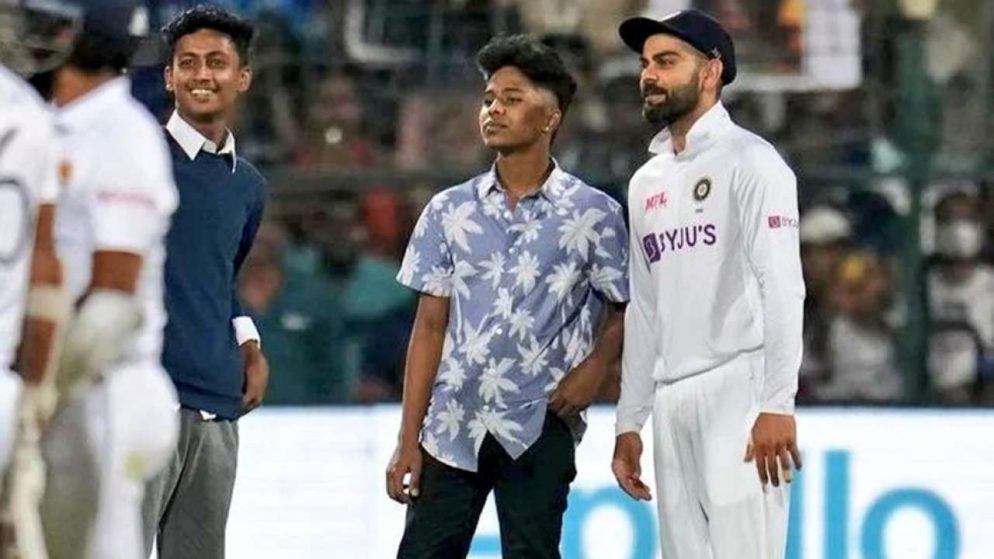 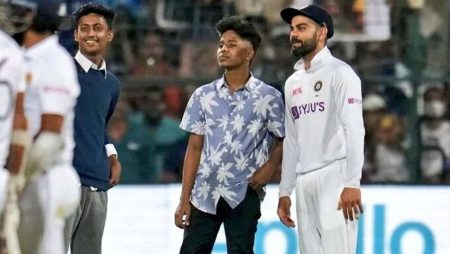 Day 2 India-Sri Lanka 2nd Test: Fans enter the field and take selfies with Virat Kohli. On Sunday, three fans broke through security at Bangalore’s M Chinnaswamy Stadium to take a selfie with former India captain Virat Kohli, and one of them succeeded.

On Sunday, three fans breached security at Bangalore’s M Chinnaswamy Stadium In order to take a selfie with former India captain Virat Kohli, and one succeeded. Kohli is at first slip in the final session of the second day of the pink ball Test against Sri Lanka when three young men run into the field and attempt to embrace the player. As the crowd roared and clapped, a group of security officers pursued the kids and eventually overpowered them before hauling them off the field.

Kohli taken aback by the sudden intrusion, but he comply with the fans’ request. Though he warn them not to get too close due to the bubble protocols.

The following is a video of the incident:

The crowd has greeted Kohli with rousing applause each time the star batsman has appeared on the field. Where his Indian Premier League (IPL) team, Royal Challengers Bangalore, plays (RCB).

Kohli, 33, is frequently the object of admiration. With one fan even touching his feet before taking a selfie with him during an IPL game in 2018.

Meanwhile, India took command of the second Test on Sunday. Setting Sri Lanka a 447-run target and leaving them reeling at 28/1 at stumps on Day 2.

On Sunday, the visitors resume their first innings at 86/6 in response to IND 252 and were bowled out for 109. With Jasprit Bumrah picking up a fifer.

Rishabh Pant then smashed a fifty, and Shreyas Iyer also hit a half-century as India declared their innings at 303/9.

Also Read: INDIA vs. SRI LANKA: The screw is turned by the hosts to gain complete control.