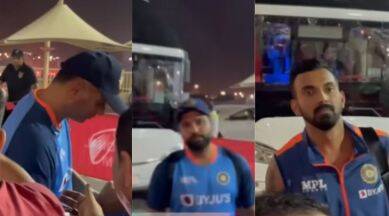 Asia Cup 2022: After the Indo-Pak match, Rohit Sharma, Rahul Dravid, and KL Rahul greet Indian fans. The Indian team’s next game will be against Sri Lanka on Tuesday.

Team India’s unblemish record at the Asia Cup 2022 was erase on Sunday. After suffering a narrow defeat in an enthralling contest against arch-rivals Pakistan in Dubai. Following the defeat, players from the Indian team, including head coach Rahul Dravid. Captain Rohit Sharma, and vice-captain KL Rahul, greeted fans outside the stadium.

The Indian team suffered a heartbreaking loss in their first Super 4 match and now faces a tough challenge against Sri Lanka and Afghanistan if they are to advance to the final on September 11th. Despite their team’s defeat by archrival Pakistan, Indian fans gathered around the team bus to meet and support their heroes.

Asia Cup 2022: Acknowledge the fans who had gathered around the team bus

Former Indian captain and current head coach Rahul Dravid was the first to acknowledge the fans who had gathered around the team bus as he stopped to sign a few autographs before boarding the bus. Virat Kohli, the Indian batting ace who scored his second successive half-century in the continental tournament. Next but went straight into the team bus while pointing to his cramps, which he sustained while fielding in the match.

Fans also noticed Suryakumar Yadav, Deepak Hooda, and Ravichandran Ashwin in the video. Fans can be seen wishing the Indian team luck in their remaining Super 4 matches against an in-form Sri Lanka and a resurgent Afghanistan. The Men in Blue will face Sri Lanka in a potential knockout match on Tuesday, September 6th, as the defending champions need to win both of their remaining matches to qualify for the final.