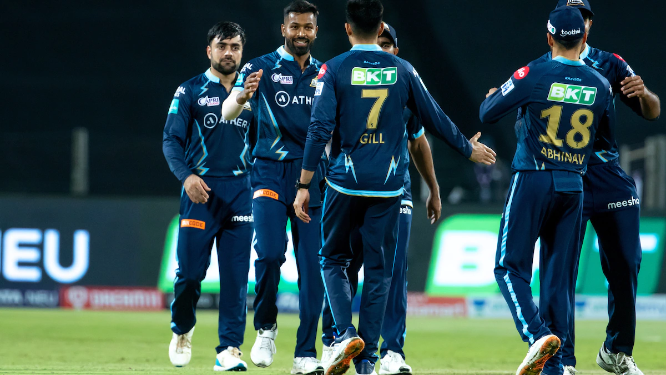 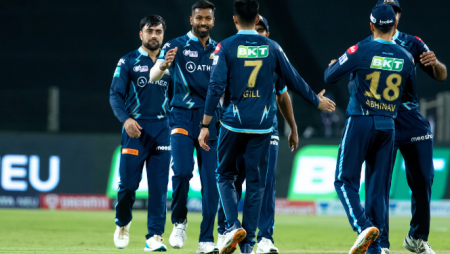 Will Gujarat Titans Change Their Winning Combination? Gujarat Titans have gotten off to a good start in the tournament, winning both of their matches so far.

Gujarat Titans (GT) have won both of their games in their debut season in the Indian Premier League (IPL). The Hardik Pandya-led team has managed to get their batting and bowling combinations just right. Shubman Gill has stepped up to bat at the top of the order, while skipper Hardik Pandya, spinner Rashid Khan, and star pacer Mohammed Shami have all checked all the boxes thus far.

Here’s how the Gujarat Titans could line up against the Punjab Kings:

Shubman Gill, who was drafted by GT, has had a mixed season thus far. Despite being dismissed for a three-ball duck on his debut, Gill led the team in scoring with 84 off 46 balls against CSK.

Matthew Wade will bat first again, this time with Gill. Wade, on the other hand, hasn’t quite lived up to expectations thus far, especially after what he accomplished during the T20 World Cup last year.

So far, Vijay Shankar in a GT shirt hasn’t quite clicked. He has failed to contribute with the bat and has been ineffective with the ball. However, before looking for an alternative, management could give him another chance.

Hardik Pandya’s captaincy has started off on a high note, with the team winning both of their games so far. Hardik has led the team from the front, making contributions in both areas of the game.

David Miller has been a valuable customer for the team thus far, scoring 50 runs in two games. He, on the other hand, will look to make a big impact for his team in the upcoming games.

Abhinav Manohar hasn’t had much to do so far, but he’ll look to contribute to the team if the opportunity arises.

Tewatia has done well with the bat so far, but he has only had one opportunity to bowl. He’s another player who’d like to make an impression on the coaching staff.

Despite not looking his best so far this season, Rashid Khan has already cemented his place in the team. He, on the other hand, has managed to bowl well in both games while also giving his all in the outfield.

Lockie Ferguson has finally been able to live up to his talent after struggling with injuries for the past two seasons. Aside from his ability to control the flow of runs, he has also taken four wickets this season.

Mohammed Shami is a well-known name in world cricket, and he needs no introduction. The 31-year-old has already taken five wickets and will look to add to his total in the coming games.

Varun Aaron has been a bit pricey this season, but he has taken a few wickets. He will try to make amends in the upcoming games.