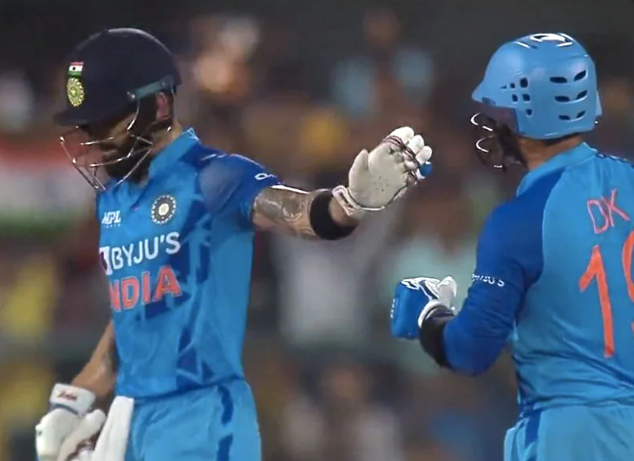 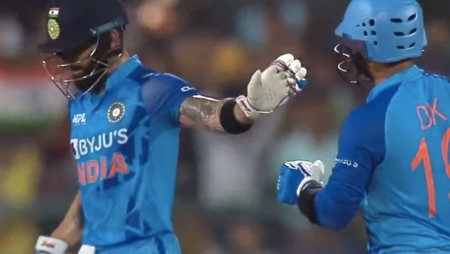 Watch: Virat Kohli, batting on 49, requests that Dinesh Karthik keep the strike for the final two balls. India vs. South Africa: In a selfless act, Virat Kohli urged Dinesh Karthik to complete the game with the bat for India, despite the fact that he just needed one run to achieve his half-century.

Virat Kohli is a prodigious run-scorer who has shattered several records in his sparkling career. He is tied with Ricky Ponting for the most international century (71), with only the great Sachin Tendulkar having more. However, he has always emphasized that he is more concerned with accomplishing what is best for the team than with individual goals. And he demonstrated that selflessness by passing up a chance to make a half-century against South Africa in the second T20I so India could maximize their total.

WATCH: Virat Kohli instructs Dinesh Karthik to retain the strike in the last over.

Kohli was on 49 off 28 as the final over began, but it was Dinesh Karthik who was on strike.

Karthik, India’s chosen finisher, missed the first pitch but hit the boundary on the next. After a dot ball and a wide, Karthik pulled a short, wide delivery away for a six.

After the knock, he came up to Kohli and appeared to ask the former captain if he wanted a strike, despite the fact that he just needed one run for a half-century and had two deliveries left in the innings.

But Kohli quickly turned him down, telling him that he needed to finish the job with the bat for India.

Only on JioSaavn.com can you listen to the most recent tunes.
Karthik went on to knock a brilliant six over extra cover, and India finished on 237/3.

Despite David Miller’s stunning century, the total was too much for South Africa to chase, and India triumphed by 16 runs to take a 2-0 lead in the three-match series.

Also visit: Team India receives a grand welcome in Guwahati ahead of the second T20I against South Africa.