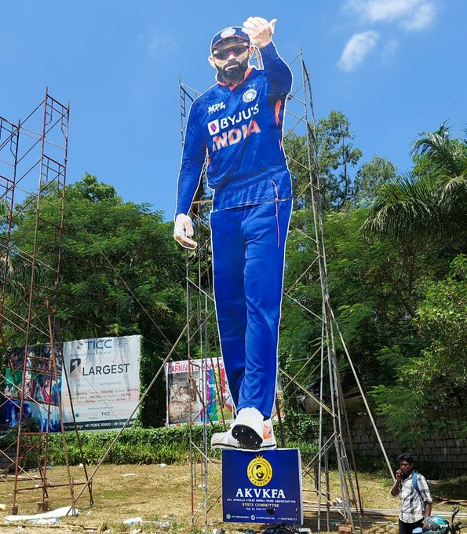 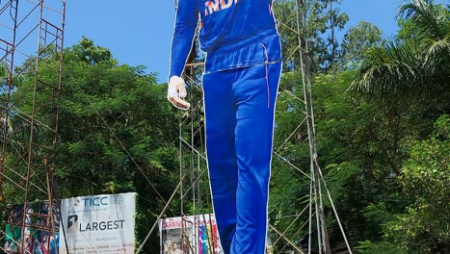 Virat Kohli’s Massive Flex Installed In Thiruvananthapuram Ahead Of First IND vs SA T20I. Following the T20I series against Australia, India will play their final T20I series before the T20 World Cup, beginning on Wednesday.

Following the T20I series against Australia, India will play their final T20I series before the T20 World Cup against South Africa, which begins on Wednesday. Thiruvananthapuram, Kerala, will host the first T20I of the three-match series. The entire city is also buzzing in anticipation of a fantastic game of cricket. A video posted on social media by the BCCI show cricketers being greet warmly in the city. While fans will cheer on all Indian cricketers, former Indian cricket team captain Virat Kohli appears to be a crowd favorite.

A massive Virat Kohli flex erected outside the Greenfield International Stadium, where the match will be held.

While the South African team arrived in Thiruvananthapuram on Sunday, Rohit Sharma and his team arrived the next day. Greenfield International Stadium has a seating capacity of 55,000 people. Upper-tier, pavilion, and KCA grandstand tickets cost Rs 1,500, Rs 2,750, and Rs 6,000, respectively. The tickets for the KCA grandstand seats would include food costs.

The final two Twenty20 Internationals between India and South Africa will be played in Guwahati (October 2) and Indore (October 3). (October 4). The two teams will then play a three-match One-Day International series beginning on October 4.

In terms of recent form, India defeated Australia 2-1 at home in a three-match T20I series. They had lost the first game by four wickets, but they made a strong comeback to win the next two games and seal the series.

Meanwhile, South Africa arrives in India after a 1-2 loss to England in a three-match Test series.