T20 Blast 2022: MID vs HAM Match Prediction – Who will win the match between Middlesex and Hampshire? 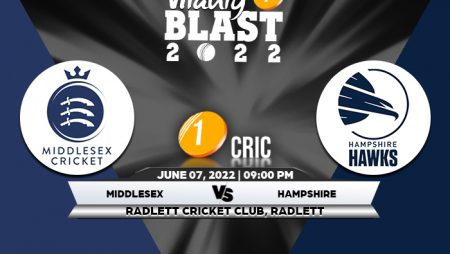 T20 Blast 2022: MID vs HAM Match Prediction – Who will win the match between Middlesex and Hampshire? While Hampshire won their last match, Middlesex are coming into the game after a loss to Kent.

Middlesex’s next T20 Blast 2022 group stage match will be against Hampshire. The game is set for June 7 at Radlett Cricket Club in Radlett (Tuesday). While Middlesex is third on the points table with three wins in five games, Hampshire is struggling in this edition, having won only one of their five games and sitting at the bottom of the table.

In terms of recent performance, Hampshire won their first game of the tournament by a margin of 22 runs over Sussex. Middlesex, on the other hand, had to accept a 55-run defeat at the hands of Kent. Both teams will want to give their all against each other in order to earn two crucial points.

Also Read: Rishabh Pant lawyer explains how he was duped through a bounced cheque from Mrinank.

Radlett Cricket Club’s pitch is ideal for batting, with the ball landing nicely on the bat. The new ball pacers, on the other hand, have created some movement in the air. Before hitting their shots, batters must apply themselves to the wicket. The captain who wins the toss may choose to chase.

Australian batter Ben McDermott was brutal in his final innings, scoring an excellent 60 off just 35 balls, smashing three fours and five sixes. He, along with skipper James Vince, ensured that Hampshire got off to a flying start with the bat.

Veteran pacer Jason Behrendorff was not at his best in the previous match. The quickie from Australia took only one wicket and was quite expensive as well. Behrendorff has the ability to get both swing and seam movement from the new ball, and he will want to put on a good performance for his team in the upcoming match.