T20 Blast 2022: KEN vs SUR Match Prediction – Who will win the match between Kent and Surrey? 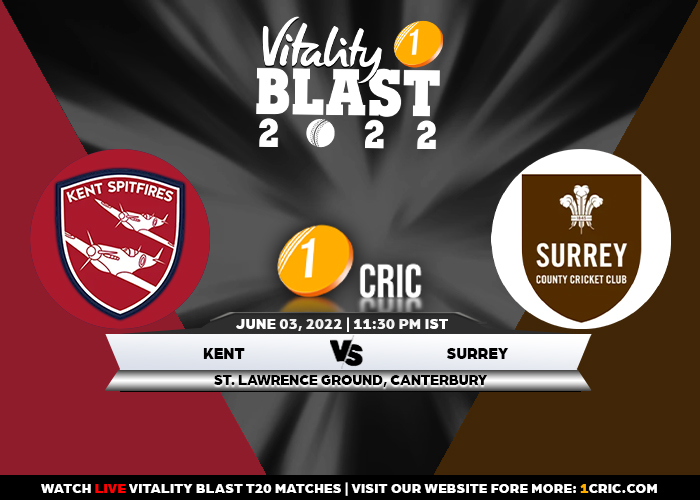 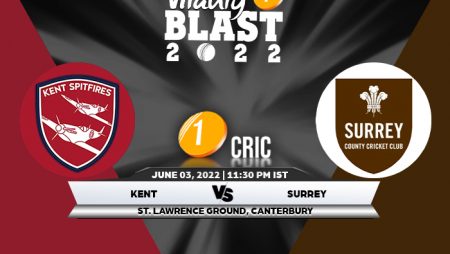 T20 Blast 2022: KEN vs SUR Match Prediction – Who will win the match between Kent and Surrey? While Surrey has remained unbeaten in the tournament, Kent has yet to win a game.

Kent will host Surrey in their next T20 Blast 2022 match at the St. Lawrence Ground in Canterbury. Kent have yet to open their account in the team standings, having lost all four games so far. Kent is eighth in the South Group points table, with a negative run rate and no points on the board.

Surrey, on the other hand, will play Hampshire in their third match on June 2 and Kent the following day, on June 3. Surrey is riding high after winning both of their games so far. The team has the highest NRR in the South Group and is third in the points standings.

The surface of the St. Lawrence Ground is batter-friendly. As a result, big runs are likely to be scored during the match. Surprisingly, this location is known for hosting high-scoring games. The average first-innings score in this arena is 175, and the team that bats first has won the majority of games. The captain who wins the toss will choose to bat first in order to put up a defendable total.

Probable best batter of the match: Will Jacks

Will Jacks put on a commendable performance against Gloucestershire in the team’s second Blast match. After losing opener Jason Roy and then the middle-order batters in a disastrous collapse, Jacks compiled a half-century with a 33-ball 51, becoming the game’s top-scorer and taking his team’s total to 129, which proved to be a winning total.

Sam Curran was out of action for a while due to an injury, but he made a fantastic comeback with Surrey in the T20 Blast. He’s been impressive with both the bat and the ball. Along with scoring some crucial runs, he has also taken five wickets in two games, including his best figures of 4/14 in the previous match against Gloucestershire.

Also Read: T20 Blast 2022: LAN vs NOR Match Prediction – Who will win the match between Lancashire and Northamptonshire?