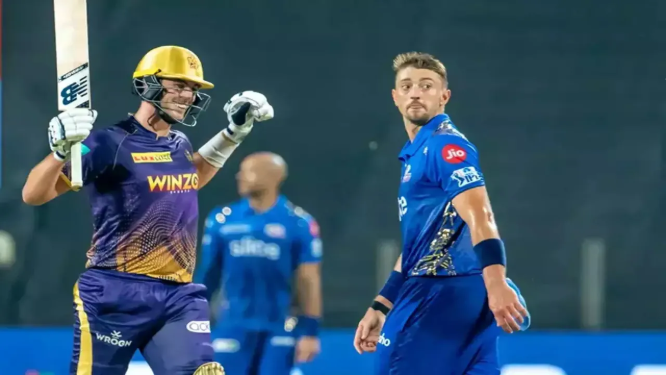 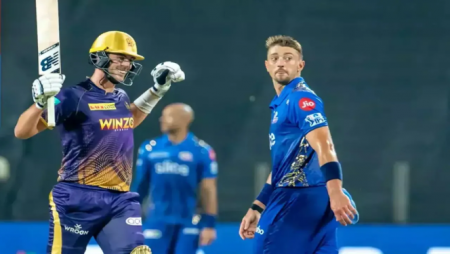 As Kolkata Knight Riders crushed Mumbai Indians by five wickets on Wednesday. Pacer Pat Cummins starred with the bat like never before, equaling the record for the fastest fifty in the IPL, including amassing 35 in an over. Cummins blazed to his fifty in just 14 balls, joining KL Rahul at the top of the leaderboard. While opener Venkatesh Iyer batted through the innings for his unbeaten 41-ball 50. As KKR completed a 162-run chase with as many as four overs to spare.

Cummins incredible as KKR needed 35 from 30 balls and got them all in just six deliveries, with the Australian Test captain hitting six sixes and four boundaries in his 15-ball 56.

Daniel Sams took the brunt of Cummins’ onslaught. Conceding 35 runs in the 16th over, which sealed the game for KKR.

Cummins, who batted at number six, and Iyer scored 61 runs in 2.1 overs to help MI beat their total of 161 for four.

As a result, MI suffered their third defeat in as many games.

KKR got off to a slow start, scoring 16 off the first four overs. KKR’s life made difficult by the wickets of Ajinkya Rahane and skipper Shreyas Iyer, who fell to 35 for two in the sixth over.

Also Read: RCB celebrate their victory over RR with a one-of-a-kind team victory song in the locker room.

Murugan Ashwin dismissed Sam Billings after he made 17 off 12 balls.

Iyer, on the other hand, went about his business in his own unique manner while keeping the scoreboard ticking.

While Iyer stood firm at one end, wickets continue to fall at the other as Nitish Rana caught at deep midwicket by Sams off Ashwin.

Cummins then turned the attack on the opposition, hitting Mills for a boundary and a six in a row.

Cummins clobbered the MI bowlers to all parts of the ground after conceding 23 runs in the final over when MI batted to take KKR home in grand style.

Earlier, veteran Kieron Pollard bolstered Suryakumar Yadav’s brisk half-century with 23 runs in the final over to propel MI after KKR kept things tight for the majority of their innings.

Early wickets were taken by Umesh and Cummins (2/49) to reduce MI to 55 for three.

Salam attempted to compete with his senior pro.

Umesh struck first blood in the third over with a back-of-length delivery to dismiss Rohit for the fifth time in the IPL. As the MI captain failed to control a pull.

Then came another debutant, Dewald Brevis (29). Dubbed ‘Baby AB’ for his 360-degree shot-making abilities, who attempted to attack the KKR bowlers.

He was successful for a short time, hitting two fours and two sixes, but he was defeated by Varun Chakravarthy (1/32).

At the other end, MI’s man-of-the-match Ishan Kishan (14 off 21) was a quiet spectator.

He was successful for a short time, hitting two fours and two sixes, but he was defeated by Varun Chakravarthy (1/32).

At the other end, MI’s man-of-the-match Ishan Kishan (14 off 21) was a quiet spectator.