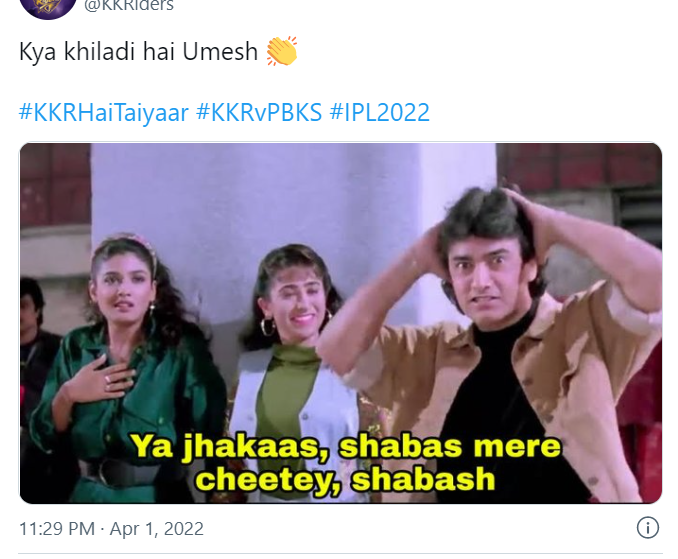 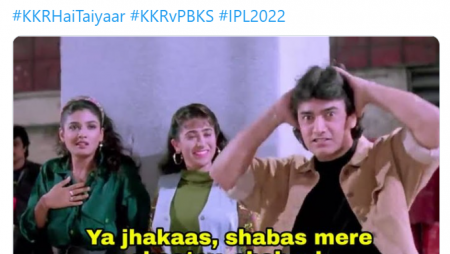 The KKR team jumped to the top of the Indian Premier League (IPL) 2022 points table after their second win in three matches on Friday. KKR comfortably chased down Punjab Kings’ 138-run target. Winning by six wickets with more than five overs to spare at Mumbai’s Wankhede Stadium.

The show was dominated by two KKR players in particular, Umesh Yadav and Andre Russell. While Umesh annihilated the PBKS batting with a four-wicket haul, Russell displayed his extraterrestrial finishing skills to go unbeaten on 70 runs off 31 balls. In light of these star players’ all-around dominance, KKR posted a hilarious meme from the movie ‘Andaaz Apna Apna’ to congratulate Umesh for his 4/23 in four overs, which included a maiden.

The post was captioned “Kya khiladi hai Umesh” and featured movie stars Raveena Tandon, Karishma Kapoor, and Aamir Khan, as well as a line from the film: “Ya Jhakaas, shabas mere cheetey, shabash.”

Umesh’s outstanding performance also helped him take the lead in the Purple Cap race. He leads the wicket-takers with eight dismissals so far in the tournament.

Russell’s brilliant knock, on the other hand, helped him earn the Orange Cap with 95 runs in three matches.

KKR will play the Mumbai Indians (MI) at the Maharashtra Cricket Association Stadium in Pune on April 6.

Also Read: Ishan Kishan, MI batter, is getting an update from Zaheer Khan.