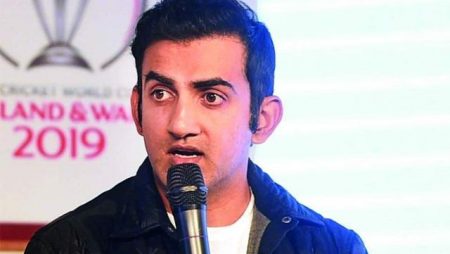 Gautam Gambhir says “Rayudu has been the player of the franchise” in IPL 2021. Gautam believes Ambati Rayudu has been the Chennai Super Kings’ standout player. Since he joined the franchise. Ambati scored an unbeaten 55 off 43 deliveries in IPL 2021 encounter. Between CSK and the Delhi Capitals and knock went in vain. Rishabh Pant-led side chased down the 137-run target to go atop in the Indian Premier League points table.

“I believe Ambati Rayudu has been the player of the franchise since he joined CSK. He scored runs when he opened or played at No.3 or No.4, he has delivered in whichever position he has played. It is very difficult when your batting order is being shuffled but despite that the way he bats,” Gautam Gambhir said.

Gautam Gambhir says, “He had an impact when he used to open with Watson, today he is playing at No.4 and he has a similar impact. We might talk about Ravindra Jadeja, Suresh Raina, and the others, but he has probably been the player of the franchise in the last three-four years,” Gambhir explained.

Moreover, Ambati Rayudu has scored 1495 runs. At an impressive average of 35.59 and an equally good strike of 130.11. And then the 58 matches he has played for Chennai Super Kings. More than the numbers, he made telling contributions in showdown situations. He was one of the star performers in the franchise’s title-winning run in 2018.

“His form is extremely necessary because there is a lot of dependency on Faf du Plessis and Gaikwad at the moment. When they don’t score runs, they don’t post a big total. So this innings will certainly help,” Ajit Agarkar said.

Lastly, acknowledging that Ravindra Jadeja is the in-form player. The former India pacer signed off by stating that Ambati Rayudu needs to carry the middle order.

Visit also: DC’s Shimron Hetmyer on his plans against CSK’s Dwayne Bravo- “For me, it was easy” in the IPL 2021