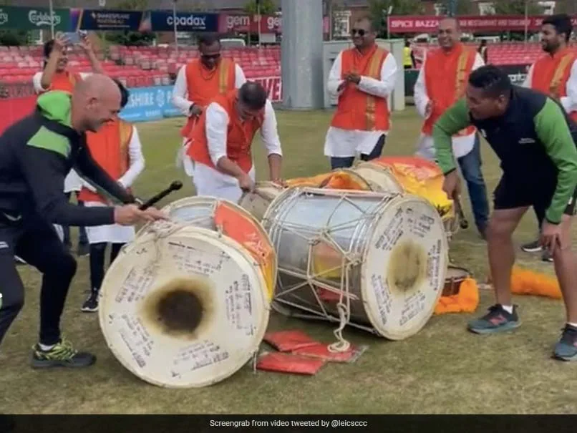 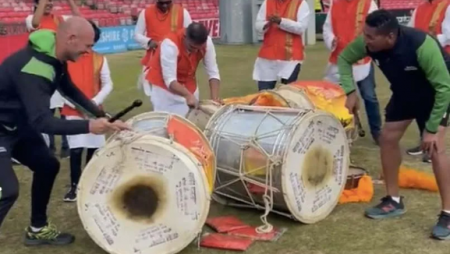 Ex-England Cricketers Perform Dhol to ‘We Will Rock You’ During India vs Leicestershire Tour Game. The tour match ended in a draw as part of India’s preparations for the rescheduled fifth Test against England in Birmingham.

Leicestershire showcased plenty of Indian culture through bhangra and dance as part of hosting India for their four-day tour game. Making the visitor feel more at home. During the fourth day of the match, which ended in a draw, Leicestershire head coach Paul Nixon and former England international Phillip Defreitas joined in the celebrations with the performers. Nixon and Defreitas attempted to play along with the beats on the performers’ dhols as the speakers at the Uptonsteel County Ground blared the Queen classic ‘We Will Rock You.’

Also Visit: Ben Stokes is the first all-rounder to accomplish this feat.

Watch India vs Leicestershire: On dhol, Paul Nixon and Phillip Defreitas perform ‘We Will Rock You.’

The tour match ended in a draw. As part of India’s preparations for the rescheduled fifth Test against England in Birmingham.

Several Indian players played for Leicestershire, while others, such as Cheteshwar Pujara and Shubman Gill, batted for both sides.

They were dealt a blow, however, when captain Rohit Sharma tested positive for COVID-19 on the penultimate day of the match.

He is in isolation and is questionable for the Test against England.

KL Rahul, who suffered an injury during India’s T20I series against South Africa earlier this month, is also a doubt for the match, potentially leaving India without their first choice opening pair.

When India took a 2-1 lead in the series last year, Rohit and Rahul were both crucial for the team. While Rohit Sharma hit a century at the Oval, Rahul had his name inscribed on the Lord’s honours board with his own fantastic ton.

Last year, the fifth Test was postponed due to a COVID-19 outbreak in the Indian camp.

The game will now take place at Edgbaston from July 1 to 5.