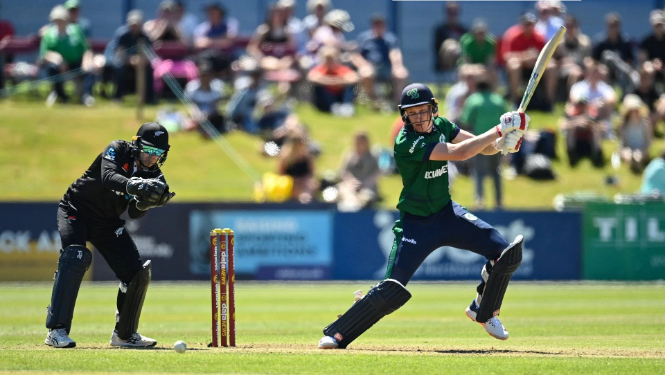 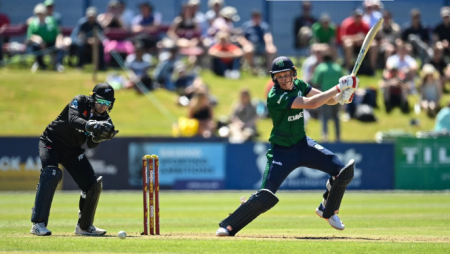 Curtis Campher Runs Out Will Young With A Terrific Throw Against New Zealand In Ireland’s Third ODI. Young drove a half-volley for a quick single on the second ball of the 13th over, but Curtis Campher’s brilliance ended his innings.

New Zealand defeated Ireland in the third One-Day International (ODI) on Friday in a last-ball thriller at The Village in Dublin. With the victory, the Blackcaps improved to 3-0 against the hosts in the series. The last match that went down to the wire saw New Zealand win by one run. Though Ireland eventually lost the match, they put up an incredible fight in pursuit of the guests’ 361-run target. They came close to winning the match, needing 10 runs off the final over, but New Zealand’s Blair Tickner held his nerve to secure the victory for his team.

While Ireland’s batters excelled in the second innings, their fielders, particularly Curtis Campher, who effected a run-out to end New Zealand batter Will Young’s innings, were outstanding in the first.

Young drove a half-volley to the right of extra-cover fielder Campher for a quick single on the second ball of the 13th over, but he failed to reach the other end in time as Campher ran to his right, picked the ball from his right hand, and hit the bulle’s eye at the non-striker end. Young left after three runs.

Also Visit: The Lord’s Cricket Ground published a video of Virat Kohli walking out to bat in the second ODI against England.

In terms of the game, New Zealand batted first and scored 360/6. Martil Guptill scored 115 runs, and Henry Nicholls added 79 runs to the team’s total. Ireland were restricted to 359/9 in their 50-over quota, despite centuries from Paul Stirling (120) and Harry Tector (108).

New Zealand and Ireland will resume their rivalry on Monday with a three-match Twenty20 International series.