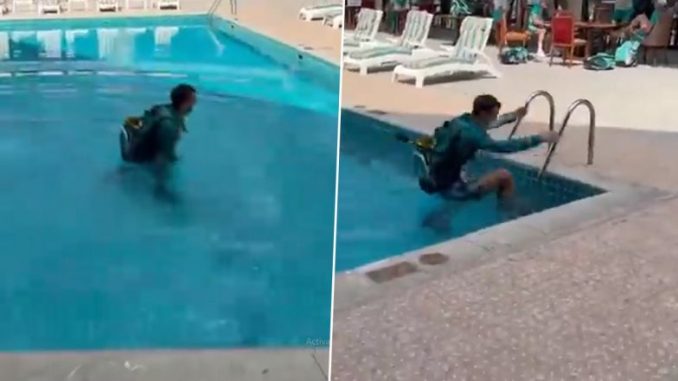 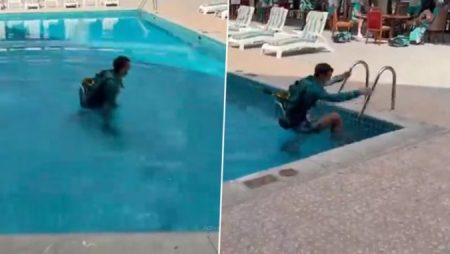 Pakistan vs. Australia: Alex Carey Falls Into A Swimming Pool in a hotel where the Australian cricket team is staying ahead of the second Test in Karachi. Teammates Can’t Stop Laughing.

The Australian cricket team arrived in Karachi earlier this week in preparation for the second Test, which will begin on Saturday, March 12, at the National Stadium. After the team arrive at their hotel in Karachi, wicketkeeper-batter Alex Carey got involve in a hilarious incident. Carey fell into a swimming pool while conversing with Nathan Lyon. Furthermore,The Australian players on the scene couldn’t stop laughing, and Carey was seen laughing as well. Pat Cummins, Australia’s captain, captured the moment and shared it on Instagram.

Also Visit: Pathum Nissanka of Sri Lanka is expected to miss the second Test against India.

Watch: Alex Carey Falls Into A Swimming Pool By Accident

After falling into the pool, Carey quickly tossed his phone to one of his teammates.

Meanwhile, the first Test in Rawalpindi last week ended in a draw.

Pakistan declared at 476/4 after electing to bat first, with Azhar Ali and Imam-ul-Haq scoring 185 and 157, respectively.

Australia responded with a total of 459 all out, despite Usman Khawaja (97) and Marnus Labuschagne (90) missing out on centuries.

Pakistan were 252/0 in the second innings, thanks to unbeaten centuries from Imam (111 not out) and Abdullah Shafique (134 not out).

Notably, for the first time in 24 years, the Australian cricket team is in Pakistan.

The last time Australia played a Test series in Pakistan, they won the three-match series 1-0 under Mark Taylor’s leadership in 1998.

While the second Test begins on Saturday in Karachi, the third and final Test is scheduled for March 21-25 in Lahore.