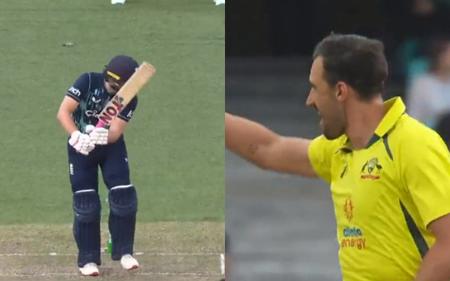 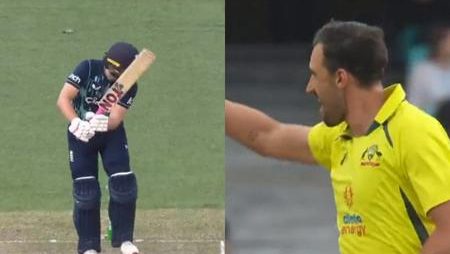 2nd ODI between Australia and England: Mitchell Starc destroys Dawid Malan with an unplayable beauty. After Mitchell Starc’s outstanding first over of the second innings, Australia was in complete control.

Mitchell Starc, an explosive left-arm pacer for Australia, is determine to establish his credentials in white-ball cricket. In the second ODI at the SCG, the speedster eliminated England’s game-winning player Dawid Malan with an unplayable nut. With the scalps of two English hitters in the opening over of the chase. The 32-year-old gave the Australians the perfect start.

Thanks to Steve Smith’s resourceful 94, the Men in Yellow put a respectable total on the board. With their heroic fifties, Marnus Labuschagne and the arriving Mitchell Marsh helped Australia reach 280 on the slick ground. The absence of Jos Buttler prevent England from winning to tie the series. But they were quickly trouble by a menacing Mitchell Starc.

Read also: Harmanpreet Kaur said -“If there is any proposal about my biopic in future, I will think about it”

Australia’s senior left-arm pacer received criticism following a subpar performance in the T20 WC that led to his withdrawal from the team for their last Super 12 game. But in his first over, the seasoned cricketer displayed his talent by jaffa dismissing the highly anticipated Dawid Malan. The left-arm pacer struck out England’s first batter, Jason Roy, in the same over, causing England to lose two hitters for no reason. Roy had been the victim of a similar fluke in game one of the series.

The Men in Yellow, led by interim captain Josh Hazlewood in place of Pat Cummins, significantly diminished the visitor’s chances by bringing them down to 34/3 during the powerplay. For the second game in a row, England’s top order struggled to perform, lacking their inspiring captain Jos Buttler, who was sitting out the contest. In the absence of the explosive wicketkeeper batter, Moeen Ali captained the team.

Sam Billings and James Vince form a strong partnership in the middle when the hosts were in control, stitching together a crucial 122-run stand for the fourth wicket and rescuing their team from trouble.

Read also: Archer is expected to return to the field early next year