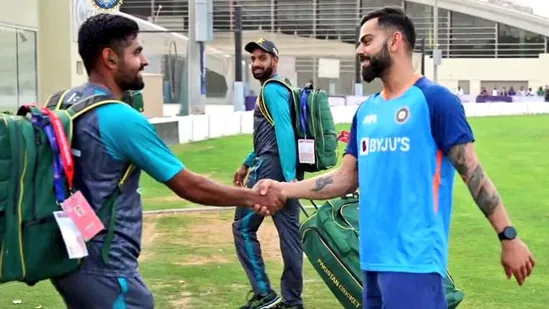 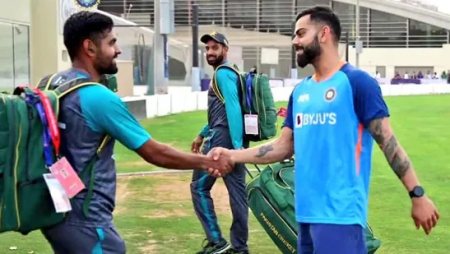 The Asia Cup 2022 match between India and Pakistan is set to take place in Dubai on Sunday. It will be interesting to see how both teams handle high-pressure situations. On Thursday, Pakistan head coach Saqlain Mushtaq spoke at a press conference about the bowling attack and how the now-viral photo of Virat Kohli and Babar Azam sends a positive message.

Both the Indian and Pakistani cricket teams practiced on Wednesday, and Virat Kohli was seen interacting with Babar Azam. The photograph has since gone viral on social media. Earlier this year, when Virat was struggling in England, Babar showed his support for him.

Also Visit: “You Were Terrible In IPL,” a fan tells an Indian cricketer. Player Reacts

“Some years back, I went to play an All-Star Game, there were top 25 cricketers of the world and we were playing together. Sachin Tendulkar and Shane Warne got everyone together, that time around, I had put out a tweet. That match was being followed by just Indian and Pakistan cricket fans in America. Both Indian and Pakistan fans had stitched together flags and they were displaying it in unison,” Saqlain said in media interaction on Thursday.

“I had tweeted then that it is just not cricket and entertainment. It helps people understand so many things, it is bringing everyone together. When we play matches, emotions run high. But this game also helps in giving lessons about humanity. I think yesterday’s picture between Babar and Virat gives a good message,” he added.

When asked if Babar had helped to reduce tensions surrounding an India-Pakistan game, Saqlain responded: “It is both entertainment and a sport. The emotions are high, but it is a sport at the end of the day. We are attempting to spread the message of kindness and love. As a result, players from both countries mix with one another.”

Due to an injury, ace speedster Shaheen Shah Afridi has been ruled out of the Asia Cup, and it will be interesting to see how Naseem Shah, Mohammad Hasnain, and Haris Rauf perform.

“For a long time, these three (Naseem Shah, Mohammad Hasnain, and Haris) have been carrying out the Pakistan cricket team’s plans and requirements. The captain and I, as head coach, have complete faith in them. There’s no need to be concerned; Shaheen used to lead the attack, but he’s not here due to injury. They have the ability to change the game on their day “Saqlain stated.

Also Read: Scott Styris issues a warning to Indian bowlers ahead of their match against Pakistan.