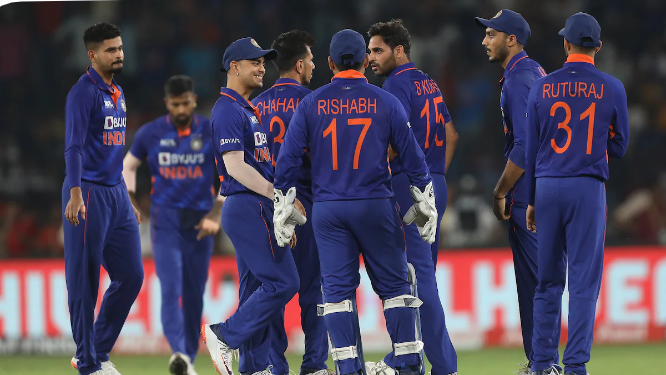 After failing to defend a large total of 211 against South Africa in the first T20I. The Indian bowlers were unable to produce anything special in the second T20I in Cuttack on Sunday. They were unable to defend a total of 148 as India suffered their second straight defeat, falling behind 0-2 in the five-match series. Other than Bhuvneshwar Kumar, who finished with figures of 4-0-13-4, other Indian bowlers struggled to take regular wickets. Senior players such as Yuzvendra Chahal, Hardik Pandya, and Axar Patel were also expensive.

Also Read: Sri Lanka fine 40% of the match fee for maintaining a slow over-rate in the second T20I against Australia.

“The main issue is that, aside from Bhuvneshwar Kumar. They don’t have any wicket-taking bowlers in this squad.” So you get wickets and put the opposition under pressure. So, apart from Bhuvneshwar Kumar, did anyone else look like getting a wicket in either match? He was making the ball move. The problem, and it’s why a total of 211 was something they couldn’t defend. ” Sunil Gavaskar said after the game on Star Sports.

The wicketkeeper-batter, who brought in as a replacement for the injured Quinton de Kock. Complete his fourth T20I fifty in 32 balls before slamming three sixes off Yuzvendra Chahal to effectively seal the chase.

But it wasn’t enough as they only needed three runs from the final two overs to complete the win, which gave the Proteas a commanding 2-0 lead heading into the Vizag T20I on June 14.

The visitors are attempting to win their first bilateral T20 series in India.

Klaasen, making his comeback after more than seven months, never took his foot off the gas and got his team out of the woods after Bhuvneshwar Kumar pegged them back to 29/3 inside the powerplay overs.

Klaasen first share a match-winning 64-run partnership from 41 balls with skipper Temba Bavuma (35) before being joined in the middle by the in-form David Miller.

Also Read: “Should Have Been Playing For India”: Dilip Vengsarkar “Surprised” By Exclusion From Ranji Trophy