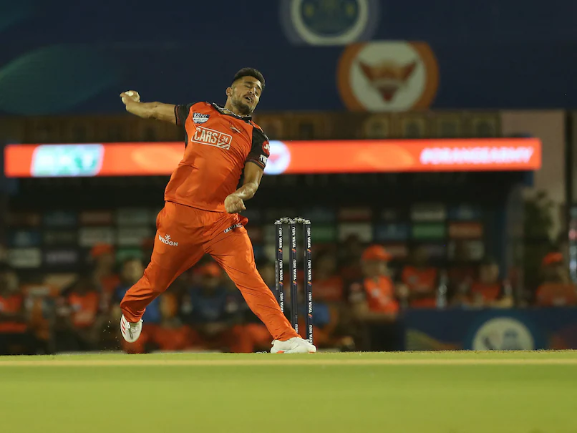 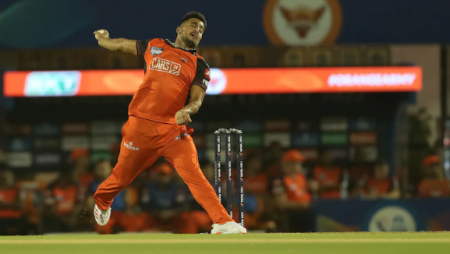 Umran Malik’s form for SunRisers Hyderabad may have dipped in the last couple of games, but his speed hasn’t. While he has been taken for a ride in the last two games, failing to pick up a wicket against the Chennai Super Kings and the Delhi Capitals, the Indian fast bowler continues to captivate fans with his pace. Malik bowls at a consistent pace of 150-155kmph and has won the fastest delivery of the match award in almost all of the matches he has played this season. However, Malik bowled the fastest ball of the ongoing edition against the Delhi Capitals on Thursday at Brabourne Stadium, breaking his own previous record.

Umran clocked a delivery at 157kmph to Rovman Powell on the fourth ball of Delhi’s final over, making him the fastest bowler in the ongoing season.

The ball was bowled outside off, and Rovman stayed deep inside his crease to hit a four through the gap between extra cover and mid-off with his bottom hand.

Umran has 15 wickets in 10 games this season, with his best figures of 5-25 coming against the Gujarat Titans. However, the pacer has gone wicketless in the last two games.

In the match between Delhi and Hyderabad, the latter won the toss and chose to bowl. Warner and Rovman Powell scored unbeaten 92 and 67 runs respectively to help Delhi reach 207/3 in 20 overs.

Khaleel Ahmed took three wickets with the ball as DC defeated SRH by 21 runs, limiting them to 186/8.

SunRisers Hyderabad are now sixth in the IPL points table, having collected 10 points from ten games. On Sunday, the team will face Royal Challengers Bangalore at the Wankhede Stadium.