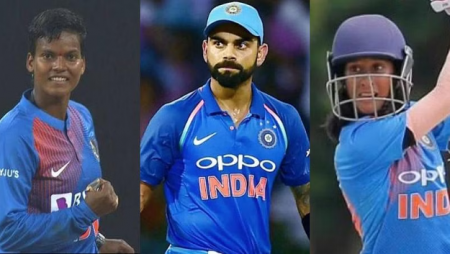 Virat Kohli and Deepti Sharma Nominated For ICC ‘Player Of The Month.’ Virat Kohli, the batting genius on Thursday.

Virat Kohli, the batting genius, and the Asia Cup-winning combo of Jemimah Rodrigues and Deepti Sharma were nominated for the ICC’Player of the Month’ award in the men’s and women’s categories. Nominations are being accept for the month of October. While Kohli nominate for the first time after his exploits with the bat in T20 World Cup victories over arch-rivals Pakistan and the Netherlands. Rodrigues and Sharma were shortlist after playing crucial roles in India’s Asia Cup victory.

Kohli scored 205 runs in October, displaying hints of his finest form. He appeared at ease when scoring an undefeated 62 against a tenacious Netherlands.

The highlight, though, was his era-defining performance in front of a packed house in Melbourne. When his team scored a historic triumph against Pakistan.

Kohli’s 82 not out from 53 balls helped his team recover from 31 for four to chase down 160 off the penultimate ball.

Along with Kohli, South African David Miller and Zimbabwean Sikandar Raza were nominate.

Rodrigues, who earlier nominate in August following her excellent performances at the Commonwealth Games. Once again the driving force behind India’s recent victory in women’s cricket.

Rodrigues the tournament’s highest run-scorer when her team defeated Sri Lanka in the final. Accumulated 217 runs from eight matches at an average of 54.25.

Among her best performances was a 76 against the eventual finalists in the first game, which set the tone for India’s prize-winning campaign.

Sharma, too, had a productive month at the Asia Cup. Her 13 wickets at an incredible average of 7.69 highlighted her persistent danger with the ball, particularly stunning statistics against Pakistan and Thailand.

Nida Dar is the final candidate in the running for the award for October. After her valuable performances with bat and ball propelled Pakistan to the Asia Cup semi-finals.