Uncertainty Over IND vs. WI T20Is in the United States Due to Visa Issues 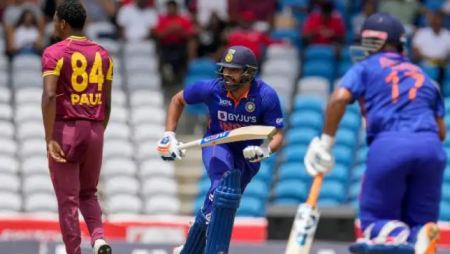 Uncertainty Over IND vs. WI T20Is in the United States Due to Visa Issues. The final two Twenty20 Internationals between the West Indies and India are schedule to take place in Florida.

The Indian cricket team’s final two games of the ongoing T20 series against the West Indies in the United States are in jeopardy because Cricket West Indies (CWI) intends to play the matches in the Caribbean due to visa issues. According to Cricbuzz, members of both sides have yet to receive their US visas, forcing CWI to devise an alternative plan.

Also Visit: Police confirm that two people were killed in an explosion at Kabul Cricket Stadium.

IND vs. WI T20Is: The games were schedule for August 6 and 7 at Central Broward Park in Lauderhill, Florida.

According to reports, many members of the Indian and West Indies squads have yet to receive their US travel documents.

“Having the games in the Caribbean is not improbable. But efforts are being made to resolve the visa issue. ” A West Indies cricket source was quoted as saying by the website.

“The initial information that the players would be given their US travel documents in St Kitts. Where the team arrived. However, there is a chance that the players will have to return to Trinidad for the visa documents and then to the US if they get the all-clear. ” The CWI also confirm the uncertainty surrounding the Florida games.

“We are exploring options while continuing to pursue the possibility of receiving the outstanding visas,” CWI president Ricky Skerritt told the website.

India leads the five-match series 1-0, with the next two matches scheduled for August 1 and 2 in St Kitts.