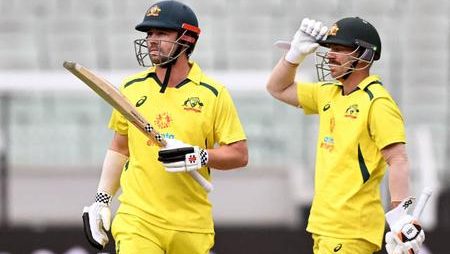 Travis Head and David Warner make significant gains in the most recent ICC Men’s ODI Rankings. In the third One Day International against England, Head and Warner each scored 100.

Following their epic 269 run partnership at the Melbourne Cricket Ground (MCG). Australia’s opening pair of David Warner and Travis Head. Have seen significant increases in the MRF Tyres ICC Men’s ODI Player Rankings. While Steve Smith has reached a career-best equaling seventh position thanks to his consistent play in the home series against England.

A score of 106 in the decisive game let Warner, a previous top-ranked batter, finish with 240 runs and take up the Player of the Series honor, moving him up one notch to fifth place on the list. Head, who amassed 208 runs following his 152 run Player of the Match performance at the MCG, has moved up 12 spaces to 30th place.

Read also: Shikhar Dhawan is prepared to make difficult decisions as India’s captain. – ‘I will take decisions to help the team’

ICC Men’s Cricket World Cup League 2, players from Namibia and the United States have also benefited in the most recent weekly update.

Smith came in third on the list of run scorers, and his 195 runs were sufficient to move him up three spots to seventh, which he had previously held in January 2017. Additionally, Marnus Labuschagne and Mitchell Marsh are now 68th and 84th on the list, respectively.

Fast bowler Mitchell Starc, who won Player of the Match for his four-for-47 performance in the second ODI in Sydney, has climbed four spots to reach the fourth spot, while leg-spinners Adam Zampa and Pat Cummins have also advanced in the bowlers’ rankings.

Phil Salt and Dawid Malan from England have climbed into the top 100. Malan is place 100th after moving up 56 positions, while Salt has climbed six spots to take up the 97th spot.

Due to their accomplishments in the ICC Men’s Cricket World Cup League 2, players from Namibia and the United States have also benefited in the most recent weekly update. Monank Patel of the USA and Namibia’s captain Gerhard Erasmus have risen up the batters’ list, while Saurabh Netravalkar of the USA has climbed to a career-high rank of 31 among bowlers after picking up two wickets apiece against Namibia and Papua New Guinea.