The reaction of Viv Richards to Jason Roy’s big hit in the PSL is pure gold. 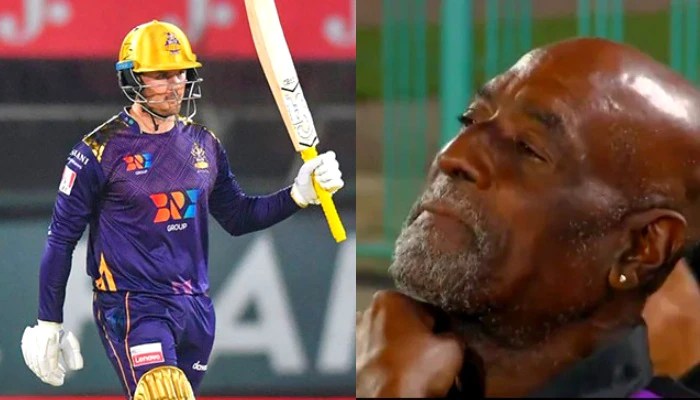 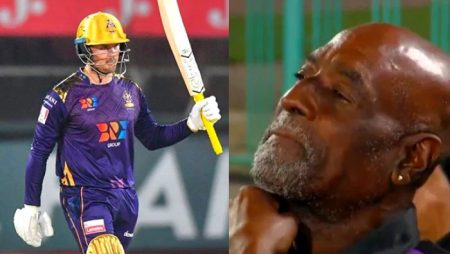 The reaction of Viv Richards to Jason Roy’s big hit in the PSL is pure gold. Viv Richards’ reaction came when Jason Roy hit a six in the second ball of the fourth over.

Jason Roy’s magnificent innings against Lahore Qalandars in the Pakistan Super League (PSL) got the cricket world talking. Legendary West Indian cricketer Viv Richards, who is on the Quetta Gladiators support staff. Was among many who gave their “approval” to the magnificent innings. Roy hit 116 off 57 balls to help Quetta chase down a 205-run target in 19.3 overs. Roy smashed eight sixes and 11 fours against the PSL’s best bowling attack. Which included Rashid Khan, Shaheen Shah Afridi, and Haris Rauf.

When Roy was showing no mercy to any of the Lahore bowlers. Richards could be seen nodding in response to one of England’s big hits in the final match. Richards’ reaction came when Roy, hit a six in the second ball to bring up Quetta’s fifty.

Also Visit: Tearful Juan Martin del Potro is on the verge of retirement and leaves the Argentine Open

“In these seven seasons of the HBL PSL, I’ve seen some incredible innings, but nothing compares to what @JasonRoy20 delivered for us today! One truly exceptional inning, “Afridi took to Twitter.

Roy’s 116 was the first century by a Quetta Gladiators batter and the 11th in the event’s history. After Rilee Rossouw’s 43-ball century, this was also the second fastest 100.

“I think it was one of my best innings, and I’m feeling great.” The collaboration with James Vince was even better.

“It was critical that we win this game and carry the momentum to Lahore, where we have two wins in five games. We were always confident and pleased to have won this game with the second best run-chase “Roy stated following the game.

One Reply to “The reaction of Viv Richards to Jason Roy’s big hit in the PSL is pure gold.”