The Florida crowd goes wild during the India-WI T20I, and Sanju Samson responds by saluting. 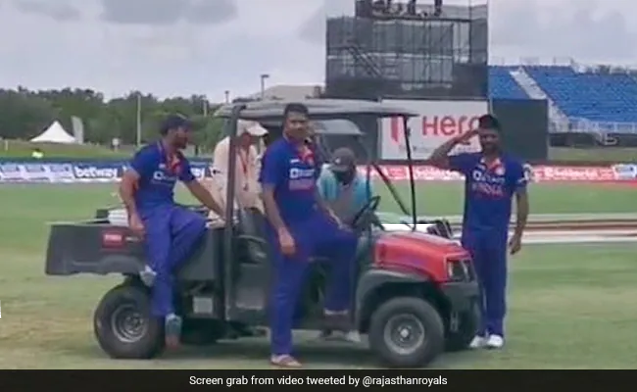 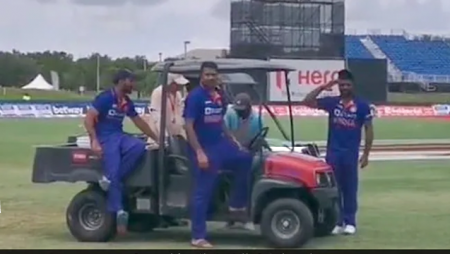 The Florida crowd goes wild during the India-WI T20I, and Sanju Samson responds by saluting. The Rajasthan Royals tweeted a video of the Florida crowd going crazy and chanting Sanju’s name, to which he responded with a salute.

A viral video of India captain Rohit Sharma riding a golf cart has gone viral on social media. The Indian team’s celebration of their five-match T20I series victory over the West Indies kept fans entertained. In the video, Rohit Sharma is giving his teammates a golf cart ride. After winning the fifth and final T20I match on Sunday at the Lauderhill Cricket Ground in Florida. Later, another video of batter Sanju Samson with Ravichandran Ashwin and Dinesh Karthik went viral, in which he can be seen saluting the crowd’s love.

The Indian Premier League franchise of Sanju Samson, Rajasthan Royals, shared the video on Twitter. In which the crowd can be seen going crazy and chanting the batter’s name, to which he responds with a salute.

Also Visit: Nurul Hasan of Bangladesh has been rule out of the Asia Cup 2022 due to a finger injury.

“The crowd loves Sanju… and he loves them back!” tweeted Rajasthan Royals.

After winning the fifth and final T20I of the five-match series against West Indies by an 88-run margin on Sunday. Team India finish the series with a 4-1 margin in T20Is, having previously won the ODI series 3-0.

Only on JioSaavn.com can you listen to the most recent songs.
Sanju scored 72 runs in three One-Day Internationals against the West Indies and 45 runs in the five-match T20I series, in which he played only two games.

Earlier in May, Sanju led Rajasthan Royals to the IPL 2022 final, where they were defeat by Gujarat Titans by seven wickets.

Also Read: Rudi Koertzen, umpire, has died. “Had A Great Relationship With Him,” says Virender Sehwag.