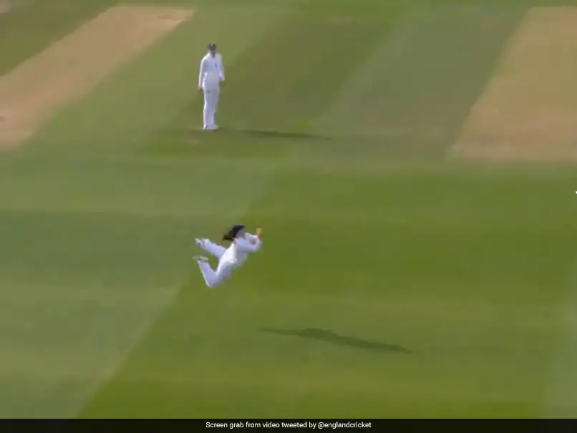 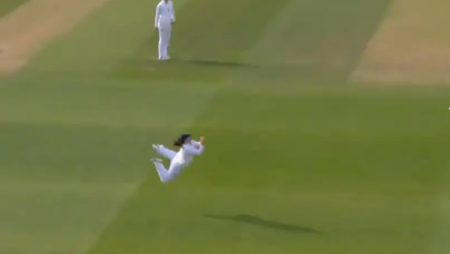 Marizanne Kapp produced one of the great Test innings on Monday. Scoring 150 to bail SA Women out of trouble and help them post a respectable total of 284 all in. The only Test against hosts England at the The Cooper Associates County Ground in Taunton. Kapp’s wicket was the penultimate wicket to fall in South Africa’s innings. It came as a result of a special effort in the field by England Women’s star Tammy Beaumont.

Beaumont flew to her right and held on to the catch that ended Kapp’s brilliant knock.

Tammy Beaumont makes a spectacular catch to dismiss Marizanne Kapp on the first day of the ENGW vs SAW Only Test.

Twitter was also stunned by Beaumont’s catch, with one user writing: “Things we learned today: Tammy Beaumont can actually fly.”

South Africa was in serious trouble at 89 for five, but a useful partnership between Kapp and Anne Bosch aided their recovery. Kapp then went on to fight the England bowlers alone, smashing them for a whopping 26 fours in her stunning 213-ball 150 knock.

Despite being in trouble at 121/5, England took a 44-run first-innings lead at Stumps on Day 2 thanks to a 207-run stand between Nat Sciver and Alice Davidson-Richards.

Davidson-Richards scored 107 on her Test debut, while Sciver was unbeaten on 119.

Lauren Bell and Issy Wong, both debutants for England, impressed also with their fast bowling.

Both players participated in the full Chance to Shine program in elementary school.

“I’m very proud to be one of the first two people to represent England after going through Chance to Shine,” Wong, 20, told ecb.co.uk.

“I recall it vividly, particularly a festival at Knowle Village Cricket Club where I got out and stood on my stumps! Chance to Shine has done a lot for English cricket, and I’m sure there will be more graduates after Belly and me.”