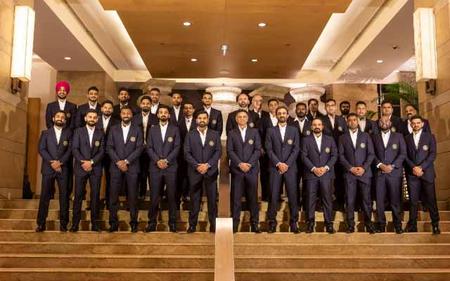 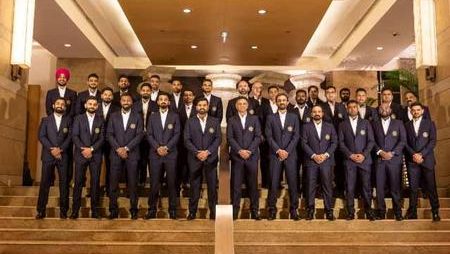 T20 World Cup 2022: India’s coaching staff has 16 more personnel than their starting lineup. The Indian cricket squad and support personnel have arrived in Australia to compete in the T20 World Cup 2022. Which runs from October 16 to November 13.

The team from Team India that is traveling to Australia for the T20 World Cup has already arrived there. And aiming to win their second T20 World Cup championship in order to end their nine-year trophy drought. The 30-person team consists of 14 players and 16 coaching staff members, with Jasprit Bumrah’s replacement still to be announce. While the viewers are familiar with the athletes donning the recognizable blue jerseys. We focus on the competitors who perform their duties without the flash and glamour of a camera.

The coaching staff is the first group of people on our list, because they are in charge of raising the level of play on the field. The 16 members of the Indian coaching staff for the upcoming ICC competition are:

Rahul Dravid’s selection as the team’s head coach was inevitable give. He would be in charge of a dynamic collection of players. He took over from Ravi Shastri, and the former Indian captain will be coaching at his first big ICC competition.

Vikram Rathour, a former Indian opener who is assisting the current generation of Indian players with their batting. Has a cordial relationship with his players. With the assistance of other technical experts, he is in charge of making modest adjustments to the team’s hitting.

Paras Mhambrey, the former Indian captain’s right-hand man and most dependable coworker, has been working with him since 2016. He has experience working with Mumbai Indians both in the IPL and the domestic circuit in India.

T Dilip, the coach with the least experience. Has experience working with the India A team and the Hyderabad Ranji team. After Rahul Dravid assumed the position of head coach, he joined the national team.

Arun Kanade, one of the most crucial members of the Indian juggernaut, is in charge of ensuring that the players. Particularly the fast bowlers, are calm before the game in order to avoid injuries. He formerly worked with Royal Challengers Bangalore. And has been a member of the Indian team for the past five years.

Over the past ten years, video analysts have become increasingly important. Hari Mohan is the man who can provide the squad on the field all the data and numbers they need. Before a match, his evaluation gives India important information.

After regular Throwdown specialist Raghu test positive for Covid-19 ahead of the 2020 Australia tour, Dayanand Garani was give the opportunity to train with the Indian squad. He formerly worked with KXIP in the Indian Premier League and the Andhra Ranji squad.

Nuwan Seneviratne of Sri Lanka, who spends ten years coaching the country’s fielding team, was brought in as a throwdown expert in 2018 to assist the Indian hitters in fending off the threat of left-arm pacers Mohammad Amir and Junaid Khan. Before the T20 World Cup, the 42-year-old will continue to provide his services.

General practitioner Dr. Charles Minz, who practices in Pune, has served as a consultant for a number of sports teams, including the Pro Kabaddi League’s Puneri Paltan and the Indian Super League’s Pune Super Giants. He was hire by Royal Challengers Bangalore (RCB) in 2020, and his job was to keep the IPL’s bio-bubble in good shape.

Before the Indian players take the pitch. Soham Desai, their strength and conditioning coach. Making sure they are physically fit. He designs a diet for the players and leads them through various exercise drills.

Paddy Upton was an important member of India’s World Cup-winning squad in 2011. Upton spent three years as the performance director of South Africa’s men’s squad after leaving the Indian camp. After working with the Indian icon for the Rajasthan Royals, he has been reunited with him for the T20 World Cup.

Rajlaxmi Arora, who is in charge of organizing interviews with Indian players before a tour or series, plays a crucial role in developing the link between Indian players and fans. She was named as the chairman of the BCCI’s internal complaints committee, which dealt with matters such as sexual harassment, in 2019.

Since Rajlaxmi Arora is in charge of setting up interviews with the Indian players before a tour or a series, she significantly contributes to fostering the relationship between the Indian players and the fans. She was selected in 2019 as the chair of the internal complaints committee for the BCCI, which handled with matters including sexual harassment.

Yogesh Parmar, who works closely with the players to keep them healthy, is Kamlesh Jain’s go-to guy. He keeps track of the players’ fitness levels, is the first to attend to their ailments, and keeps checks on how well the squad’s injured players are recovering.

As a media manager, Moulin Parikh is responsible for coordinating player interviews with Indian broadcasters. Moulin, a former journalist by profession, notifies the broadcaster and media outlets about the players who have been chosen for pre- or post-match interviews.

As a Security Liaison Officer, which is arguably the most crucial position on any team, Ravindra Doiphode makes sure that the players are secure. In addition to keeping an eye out for any illegal approaches toward the players regarding rigging or undermining the integrity of the game, he is constantly on the lookout for suspicious aspects. The ideal candidate for the position is Doiphode, a retired ACP of the Mumbai Police.